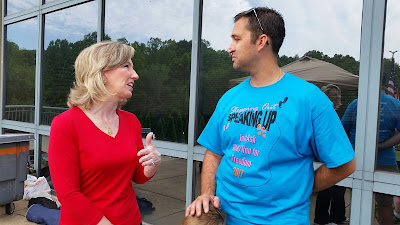 WASHINGTON — Teen sex trafficking is a major problem in Northern Virginia. But sometimes victims of this crime are so broken that it’s almost impossible for them to ever overcome the damage that’s been done.

“It ruins their lives. There’s no coming back from it,” said Fairfax County police Detective Bill Woolf, who works with the police department’s major crimes division in the child exploitation unit that deals with human trafficking in Northern Virginia.

He said that according to the National Human Trafficking Hotline, Northern Virginia continues to be a hot spot for teen sex trafficking. And traffickers are very cunning in who they target.

They target both girls and boys. But their main target is girls between 11 and 14 who have low self-esteem.

“This is definitely coercion and manipulation,” said Liz Payne with Just Ask, a nonprofit that works to end trafficking.

I just watched a documentary on this practice and the attackers were targeting these young girls at malls and it was just as the article stated. They watched for the one who looked as if she had lower self-esteem. If she were looking at the ground while walking for instance. Then they would move in on her. Compliment her, buy her things, act as though they were really interested in her. Then when they had her culled from the herd, they pounced. The young girls were raped, beaten, drugged, pictures were taken of them in their underwear and they were posted on backpage.com where they were basically sold over and over and over. Backpage.com was taken to court like 6 times in six years over this and each time they came out victorious through Section 230 of the Communication Decency Act, part of the First Amendment, which protects websites from liability for third party content. So even though these were minors, who were being sold against their will in most cases, nothing could be done against backpage.com. Did a little further research on this because it really upset me watching it and found that in 01/17 a Senate Subcommittee investigated backpage.com and found they had knowingly concealed evidence of criminality by editing adult ads. This editing makes it clear Backpage executives knew their website facilitated illegal activity, including child sex trafficking. This didn't change anything about the law but Backpage supposedly agreed to stop. You can go on their website right now and look under dating, on Eastern Shore, under Maryland and see people from Salisbury and OceanCity. Some of the Asian girls still looked pretty young to me but I could be wrong. Now they use little emojis or whatever they are called to point out new girls. Like using a "cherry" to signify a virgin.