That's right Ladies & Gentleman, Michele Ennis has formally put her hat in the ring to be considered as the next Wicomico County Executive. And why not, she's by far the most qualified and knows everything there is to know about the County after being employed there for almost 18 years.

However, the spite from the men on the County Council makes her a major underdog. Why, because she's more educated and experienced. So a NO from the Council simply means they're extremely afraid of a, get this, WOMAN!

I say, why not give her a chance. Why not let the taxpayers see if in fact a woman is qualified to do the job. However, what I see is these men running scared of an educated woman who would finish Bob Culver's legacy. The mere fact that Michele applied for the job, (which would pay her far less then she was making and or WAY less in the private sector) simply proves she loves Wicomico County. Did you know she was born and raised here. You may not know a lot about Michele and in fact I just may hold off telling you her total background until after they Council make their appointment because I want to show you just how stupid these men are and how these council members do not have the taxpayers best interest at heart.

It's time to come out of the dark ages. It's time a qualified woman be considered for such positions. Remember, I said QUALIFIED. Not like Salisbury Mayor Jake Day did by hiring non qualified people in top positions, Michele is qualified and experienced. We now live in an era where woman are starting to be seriously considered and finally respected. That's a good thing. However, there are a lot of "Old School" men in power holding back qualified women and that needs to change, especially locally. 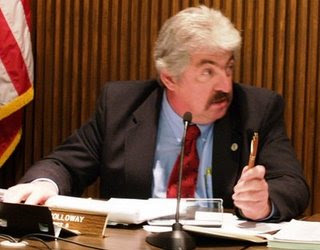 Well today has been a real surprise! I've known Joe Holloway for a lot of years and when I heard he was interested I was somewhat blown away, for all the wrong reasons.

So today I've come to learn he put his hat in the ring. I can tell you I had attempted to encourage Joe to run against Rick Pollitt back in the day but Joe chose not to.

If there's one thing I know about Joe Holloway, he will surround himself with the best minds in all departments to move the County forward.

There are some serious contenders in which I truly wouldn't want to be on the County Council but it's time to put their big boy pants on and earn their paychecks. This will be very interesting to watch. I can only hope the Council announces WHY they made the final decision. The vote should be next Tuesday or Wednesday.
at 8/16/2020 10:30:00 AM 86 comments:

Are Second $1,200 Stimulus Checks coming? Here's what we know

Capitol Hill has come to a standstill following heated discussions last week on what to include in the next coronavirus stimulus package.

One thing they did seem to agree on was another set of $1,200 checks to Americans, similar to the payments that went out this spring.

While Treasury Secretary Steven Mnuchin has said he wanted to start getting those second checks out this month, that seems more and more unlikely the longer that Congress fails to seal a deal.

"What I would say to people is there is still a pretty good chance that you're going to get these payments," said Howard Gleckman, senior fellow at the Urban-Brookings Tax Policy Center. "But it's impossible to know when or how long it's going to take."


Kamala Harris, the politically shrewd California senator with a law enforcement background that has caused some tensions with the progressive left, was announced Tuesday as Joe Biden’s running mate.

She makes history as the first Black woman to serve as a major political party’s VP pick. The Biden campaign said Biden and Harris will deliver remarks together on Wednesday in Wilmington, Delaware.

"I’ve decided that Kamala Harris is the best person to help me take this fight to Donald Trump and Mike Pence and then to lead this nation starting in January 2021," Biden said in an email to supporters.

Biden also tweeted: "I have the great honor to announce that I’ve picked @KamalaHarris — a fearless fighter for the little guy, and one of the country’s finest public servants — as my running mate."

He added: "Back when Kamala was Attorney General, she worked closely with Beau. I watched as they took on the big banks, lifted up working people, and protected women and kids from abuse. I was proud then, and I'm proud now to have her as my partner in this campaign."

He won't have three funerals. He won't be flown all over the United States. He won't lie in state at the Capitol rotunda. He won't get much mention in the news after today. He is a black man who was raised by a mother who was a cleaning woman and domestic worker (read that as a maid), and a father who was a barber and a janitor. The senior Cain later worked three jobs to build a house for his family. Herman Cain rose from nothing to become an astute business man. At 36, he was assigned in the 1980s to analyze and manage 400 Burger King stores in the Philadelphia area. His success at Burger King prompted Pillsbury to appoint him president and CEO of another subsidiary, Godfather's Pizza. In 1988, Cain, Ronald B. Gartlan, and a group of investors bought Godfather's from Pillsbury. After he left Godfather's, he was on the board of directors of Aquila, Inc., Nabisco, Whirlpool, Reader's Digest, and AGCO, Inc. The list goes on and on. There will be no military honor guards. No presidents giving a eulogy. No media coverage for three hours during prime daytime TV. Why? He was black and successful. He was a business genius. BUT..........he was a conservative in a country where a black man, a successful black man, dare not take that path. Rest In Peace, Sir. You mattered to more people than you know.
at 8/16/2020 10:30:00 AM 33 comments:

Morning Joe co-host Mika Brzezinski went berserk on her MSNBC show Friday morning, lashing out at President Donald Trump after he called her “ditzy” and an “airhead.”

In a classic textbook example of Trump Derangement Syndrome, Brzezinski lost her temper several times throughout the broadcast, going on unhinged rants against Trump throughout various interviews and segments.