Sen. Ted Cruz (R-TX), one of Congress’s most ardent supporters of Israel, plans to introduce a resolution explicitly condemning anti-Semitism next week, according to a report.

Jewish Insider, citing “a source familiar with the plan,” reported that the Texas Republican is helping to a draft a measure which is solely a “condemnation of anti-Semitism.”

“There’s nothing extraneous. The entire thing clocks in at just over 100 words,” the source told Jewish Insider. It is unclear whether the text will mention Rep. Ilan Omar (D-MN), whose latest anti-Jewish remarks prompted the House of Representatives to pass an anti-hate resolution Thursday. Last week, Omar received bipartisan blowback for suggesting pro-Israel organizations pressure lawmakers into pledging allegiance to a foreign country.

Brief Supports Benisek v. Lamone Plaintiffs, Attests to Harmful Effects of Partisan Gerrymandering
ANNAPOLIS, MD - Governor Larry Hogan joined with former California Gov. Arnold Schwarzenegger to file an amicus curiae brief with the United States Supreme Court in support of the plaintiffs in Benisek v. Lamone, the case involving Maryland’s gerrymandered 6th Congressional District. Governors Hogan and Schwarzenegger argued in their brief that gerrymandered districts promote political extremes in both parties and drown out the voices of moderate voters. After a panel of federal court judges unanimously ruled in November 2018 that the 6th district violated the First Amendment of the U.S. Constitution, the defendants, represented by Attorney General Brian Frosh, appealed the decision to the U.S. Supreme Court.

“Free and fair elections are the very foundation of our democracy, and it’s past time for leaders on both sides of the aisle to put an end to the disgraceful practice of partisan gerrymandering,” said Governor Hogan. “I thank Governor Schwarzenegger for his support of nonpartisan redistricting reform in Maryland and across the nation, and for joining in making this appeal to the highest court in the land. By upholding the unanimous federal court ruling, the Supreme Court will bring integrity to Maryland’s congressional districts and enable hundreds of thousands of our citizens to truly participate in elections.”

"The first three words of our Constitution are ‘We the People’ - not ‘We the Politicians.’ For 200 years, politicians have used the scam of partisan gerrymandering to put their own interests above the interests of the people, and it’s time for change. Since we passed our independent redistricting commission in California, the voters’ approval of our legislature have skyrocketed, and it’s no surprise. For the first time, voters are picking their politicians instead of the politicians picking their voters, and the competition and accountability have produced results that benefit all of the people. I am honored to stand with Governor Hogan in asking the U.S. Supreme Court to put the voters first."

A manager at Google allegedly cautioned a lower-level employee for questioning the company’s stance on “fake news,” telling him that the company had to stop fake news and “hate speech,” because “that’s how Trump won,” according to a post aired publicly by another Google employee on social media.

Mike Wacker, a software engineer at Google, published on social media a redacted email he claims he received from a fellow employee in 2017, which alleged political bias at the company. According to Wacker’s post, his colleague at Google wrote:

"Also, I posted a comment on a meme regarding fake news on Search and someone reported it to [Human Resources]. I didn’t say I was in favor or against, just cautioned that we need to be car[e]ful. My manager brought it up in our 1:1 last week. Made me feel very uncomfortable for having an opposing view. He said we need to stop hate [speech] and fake news because that’s how Trump won the election.

"I obviously didn’t say anything and just wanted it to end. I [redacted] would like to see all managers be required to take political bias training."

The employee also alleged the existence of official training courses at Google dedicated to “bashing conservatives and Trump supporters.”

Trooper Shoots Suspect After Being Stabbed In Carroll Co.

(WESTMINSTER, MD) – A suspect who stabbed a state trooper and was then shot by that trooper in Carroll County this morning has died and the trooper remains hospitalized.

The trooper is a six-year veteran who is assigned to the Westminster Barrack. He is being treated at the UMD R Adams Cowley Shock Trauma Center.

The suspect is a 34-year-old man from Carroll County. He was pronounced deceased this morning at the Carroll Hospital Center.

According to the preliminary Maryland State Police investigation, a trooper from the Westminster Barrack was responding to the area of Washington Road in Westminster to contact the victim of a destruction of property, who reported his tires had been slashed and his vehicle had been damaged for the second day in a row. While the trooper was responding, a second individual contacted the barrack and reported the tires on their vehicle had been slashed. This victim gave a description of a suspect and said the suspect was armed with a knife.

The trooper-involved shooting is being investigated by the Maryland State Police Homicide Unit. Upon completion, the investigation will be submitted to the Carroll County State’s Attorney’s Office for review. The Carroll County State’s Attorney and members of his staff visited the scene this morning and will continue to receive briefings from investigators. An investigation by the Maryland State Police Internal Affairs Division will also be conducted.

The scene is being processed by Maryland State Police crime scene technicians. Assistance is also being provided by the Carroll County Sheriff’s Office. A knife has been located at the scene. 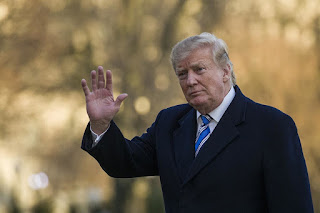 A day after most of the country turned their clocks forward, President Donald Trump on Monday morning threw his support behind the push to permanently change to daylight saving time.

State legislatures across the nation are considering eliminating the practice of changing the clocks twice a year, calling it confusing and ineffective. The practice was originally intended to increase the number of sunlit hours during the workday, but research suggests it actually decreases productivity.

In December 2017 the head of opposition research firm Fusion GPS admitted in a court filing that his firm paid Nellie Ohr, the wife of senior Justice Department official Bruce Ohr, to help dig up damaging information on then-candidate Donald Trump.

The connections between Nellie Ohr and the ‘Spygate’ scandal were hidden at a distance for months.

As noted previously at TGP, Nellie Ohr is a Communist sympathizer connected to Russia as well as a corrupt Never-Trumper.

Author Diana West at the American Spectator posted an article on Nellie Ohr last year. Nellie Ohr is “the “dossier” spying scandal’s woman in the middle.”

To one side of Ohr, there is the Fusion GPS team, including fellow contractor Christopher Steele. To the other, there is husband Bruce Ohr, who, until his “dossier”-related demotion, was No. 4 man at the Department of Justice, and a key contact there for Steele.

What’s more revealing about Nellie Ohr is how the men in her life are protecting her involvement in the Russia scandal:

It appears that the men in Nellie’s life did all they could to prevent Nellie Ohr from being outed for being involved in the dossier because she also has links to the CIA and therefore to John Brennan.

Hi Joe... I have some exciting stuff here... Not sure how you might feel about it but this Course is a very much needed one by all Americans... We are loosing because we are not educated enough to make an argument stick... second question ourselves because of being unsure what the Constitution Says... anyhow here is our flier. if anything you can share with your Conservative friends that maybe interested. Thanks and God Bless... Ellen Bethel
BTW... Thank you so very much for helping me with the post on Kathie last month!
.
DRW is covering the cost of the Teacher so only the Book fee is due. if we have 20 sign up then its only $42.


Here is the Information.:
INSTITUTE OF THE CONSTITUTION
is
Teaching a 6-week course
Beginning on Saturday, April 6th
1pm -3:30pm
Wicomico Co. Library
Cost:  Was $70  NOW $47 (Book Fee)
Thanks to the DRW “Love for America” Fundraiser
PLEASE RSVP and mail in payment by:
March 30th
Contact Mrs. Coll 410 4741712