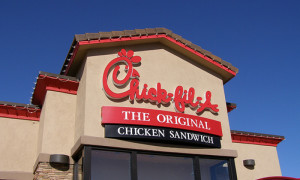 Liberals have dubbed it “hate chicken” for its CEO’s public opposition to same-sex marriage. But, once again, Chick-fil-A is proving its haters wrong with an extraordinary act of kindness. And this remarkable story is going crazy viral.

A Tennessee man and his daughter stopped by a Chick-fil-A and witnessed an incredible act of kindness.

Joey Mustain took his daughter, Stella, to the fast-food chain on Monday and after they finished eating, his daughter traded in her toy for an ice-cream cone. They sat in a booth as Stella ate her dessert and witnessed what Mustain is calling a “beautiful scene.”


“A homeless traveler had walked in and asked if they had any extra food. Mud was wet and caked on his well-traveled shoes. His hair was matted, and his beard wasn’t a statement as much as it was a necessity and a sign that he doesn’t get to shave as often as most of us do,” Mustain said.

To bad our local Salisbury CFA isn't this kind. I watched on a cold winter day as the female manager confronted the "Please help, left abusive husband" panhandler from the public corner where she was sheltered by trees/bushes and safe from traffic, to across the "street" to the Kohl's parking lot, where she had no curb or anything to protect her from getting hit.

You could tell by the confrontational mannerisms of the female manager, that if the lady didn't move they were calling the police to have her escorted away. The panhandler was non-confrontational and quiet.

Shouldn't they have bring bringing her a hot cup of coffee, or seeing if they could assist, rather than shooing her away?

No, every business shouldn't HAVE to help - but CFA promote this BS all the time that they are saints and uber-christian like, but in the end they are hypocrites!

Good for the manager, I wouldn't want drug money beggars near my establishment either. That sign she made holds no truth, she always stands with her "abusive husband" around the city scamming soft hearted fools as yourself just to get enough money for her next drug high, check case search. Maybe the woman should have also obeyed the "no beggars/trespassing" sign posted near those trees and the "mean Ol' chic Fil a manager" would have never had to get involved.

Let me ask you this? What did you do to help? Did you offer her a coffee or a meal? A ride to someplace safe? I probably already know the answer...everybody else should be held accountable except for you

@7:33 - on the corner is not owned by Chick-fil-a, no right to move her. There actually is no sign on that corner, and if there were it is not legally enforceable, just something Babs had made up. I just state the hypocrisy of CFA in wanting everyone to think they are goody two-shoes.

@7:38 - I earn less than the poverty level for my job of 60+ hours a week, and I pay for the education of a 5 year old child, plus for their food and clothing, along with tutoring and mentoring in my spare time. (not my biological child and not in a relationship with parent) - I also do not claim to be Christian. Not my job to help everyone. I also leave others be and don't unduly harass them for standing on a street corner.

So 7:38 - since everyone should be held accountable - I assume you volunteer at the Christian Shelter 20 hours a week, and tithe 10% of your income to the church??

Love this story. Thanks

We tried to give a meal to the guy that sits outside KFC by Kmart with a sign. He refused the food, stating he wanted money. Sorry about your luck buddy.