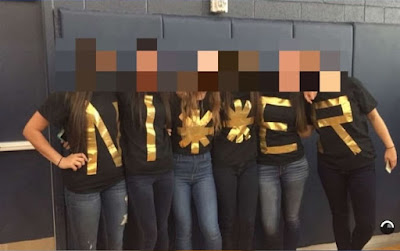 People were horrified Friday when six white girls at Desert View High School in Phoenix decided to spell out a racial slur on their T-shirts, then post a photo of it to Snapchat where it went viral. My children attend that school, and know the girls involved. One of them has a black boyfriend, and at least a couple of the others have also dated black students. Outrage over the photo has gone national, and a petition asking to expel the students has acquired over 37,000 signatures. It is also asking to fire the principal, because there is a perception the school is only going to suspend the students for five days. The school has not formally announced the discipline, obviously under pressure to throw the book at the students. Rev. Jarrett Maupin, a young man who has fashioned himself into a sort of Al Sharpton of Arizona, is organizing a Black Lives Matter rally at the school Monday afternoon.

Here is the problem: Why do people still think it is acceptable to use such an offensive word and joke about it? I blame their parents. Society has become so politically correct that anyone with a pulse should know that using a word that actually isoffensive is going to result in a backlash. These girls are 17 and 18 years old, old enough to know better. Unfortunately, parents don’t always monitor what their kids are watching on TV, listening to on their iPods and doing on the Internet. Watch a few too many movies with racial slurs in them, with no parental guidance explaining how inappropriate they are, and a teenager may treat them as a joke.

So they want to ban words ? That's a short jump to ending free speech which is the Progressive goal.

its not what you say ,its how you say it . also who died and left that writer in charge !

You're kidding me right is this a joke? they are trying to make a point!! The N word is alive and well and used by 96% of the black community. The absurdity of these perpetual situations just boggleS my mind. Is this country that stupid, that ignorant that fRiggin retarded. That we have to listen to this fecal matter as some form of truth? This country is so lost. Most youth have no respect for authority,fellow man, or your fellow citizens, it's all about what they can get to satisfy the egotistical little maniacs we have been sowed. What has been created will come back to bite us and you have the marxist liberal agenda and education system to thank for that. The sky is black the sky is purple, boys are men, boys are girls, girls are boys, confused yet? Was nt it nice when you could call the kettle black because it was?

The fact is blacks use the word more than whites. Just listen to rap music.

I would totally laugh at a bunch that spelled honkey lol. Of course this made the news, it portrays more of the agenda the administration wants to continue the racial divide. People are racist but as a white person im sick of being abused by blacks that we "might be labeled a racist if" its awkward to deal with the world now. Many racial tensions have been made so much worse by this governments manipulation of the issue. Lord help baltimore, every bit of civil war history will end up in the scrap pile off 895 if they have anything to do with it up there


It is a distasteful word, and the context in which it is used varies.

But it is very common in rap 'music' and in the day to day conversations of many blacks, especially the youth.

What I saw was the word 'rein' spelled backwards. Not worthy of sanction.

Okay, so blacks can use that word and its okay, but white people can't? If that word is bad, then everyone should not be allowed to say it.