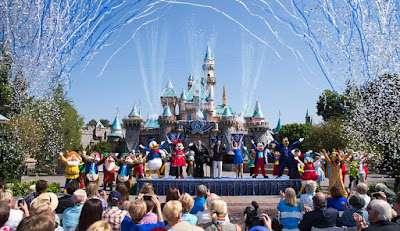 Leo Perrero and Dena Moore say they were illegally replaced by foreign workers. Both were laid off from their IT jobs at Walt Disney World in Orlando in January 2015.

They were told they had 90 days to train their replacements: Foreigners on H-1B visas, the most common visa for high-skilled foreign workers. If they didn't agree, they weren't eligible for bonuses or severance packages.

Perrero and Moore weren't the only ones in this situation. Up to 300 workers also lost their jobs.

The lawsuits, filed in a Tampa federal court Monday, charge Disney and two global consulting companies, HCL and Cognizant, for colluding to break the law.

The H1B system supposedly has safeguards to prevent this from happening.

I hope these three get hammered!

The H1B is soooo abused in this manner....

Didn't a couple more big companies do the same thing? AT&T did it too, I think.

Really makes Disney's "It's a Small World After All" exhibit/ride even more toe-clenchingly annoying, in context.

BTW folks, Disney is one of the half-dozen global corporate interests that control everything you see, hear and read. And, they have a very close working relationship with 21st Century Fox [Fox News]., co-owners of Hulu and in 2020 take ownership of rights to Fox's stake in Lucasfilm Ltd [Starwars]. There's probably more that I don't know about but digest this for starters.

Hey can I sue our government for it's BS liberal policies, just kidding. I'm a white middle class disabled service connected veteran that was recently told I couldn't do the type of work needed and get this interviewed by a Hispanic make here in temporary work visa speaking at best what would be considered "broken English " what's wrong with this scenario people. I get injured while in military so I can come home and have a man from Hispanic country here temporary to tell me I'm not qualified!! Awesome thanks America !!

I think you meant to say that Disney owns ABC news and ESPN and A&E. Not Fox news.

Well actually Disney does have a close relationship with 21st Century Fox (not affiliated w/FoxNews)as well as a lot of other production companies mentioned by 2:06 and many others not listed. Disney is the parent company of ABC Television Group which 'owns' A&E networks and many other networks. The relationships come because Disney 'buys' from a production company the shows that air on their networks. For instance not mentioned above Firecracker Films is the production company that produced Gypsy Sisters and currently still My Big Fat Gypsy Wedding and My Big Fat American Gypsy Wedding. They 'sell' to TLC which airs the programs and is part of the A & E Networks.

Not A&E but A&E Networks. Disney isn't the sole owner but in a joint 50/50 venture with the Hearst Corp.

Don't be fooled by the happy cartoon faces - Disney is a for-profit machine.

The point I'm trying to make here is, Disney is part of the cabal determined to control humanity and rule. The actions that this suit addresses are just a glimpse of what the global corporate giants consider business as usual., absolutely no consideration for the employees. And, as long as the U.S. government fosters that behavior it will continue.


Been avoiding Disney and its products for quite some time when possible. Same with Comcast/NBC.


Americans we have the power to take care of situations such as this.We must as a country need to STOP letting the Elite and Govt. separate us as a people.White,Black,especially need to stop falling for this race card they are playing and come together as Americans and take back our Country.Color is an illusion to keep us fighting each other so stunts such as these can continue.