WHAT IS HOLLYWOOD’S BIG GAY PROBLEM? 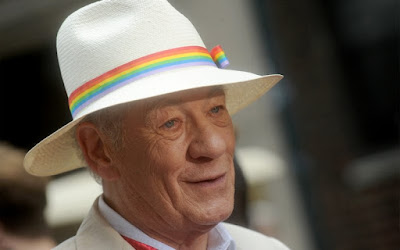 Money and a Cowardly Lack of Imagination

As the ripple effects of #OscarsSoWhite continue, Sir Ian McKellen called out the Oscars for homophobia. Is true Hollywood diversity a pipedream?

How will Hollywood’s finest behave on Oscars night? Self-flagellating? Serious? Wry and ironic? Will they say all the right things? Boycott the red carpet? Use the traditional frock and tux parade for political and cultural sloganeering?

Will there be rhetorical fireworks on stage, or will this year’s great diversity debate be made safe and neutralized?

First, this year’s Oscars were rightly skewered for having a race problem—no black actors or movies depicting black stories nominated, an embarrassing, damning sea of white.

Who really cares about the Oscars?

Being gay is a disease and should not be glorified in any way. It's fine if you are gay behind close doors I am just sick of it being put in my face and having to explain to my 4 year old.

Hollywood is as gay as it gets. Always has been.

I'm sure there have been Oscars where the gay nominees/winners outnumbered the straight ones.

Just like the basketball MVP awards are going to be mostly, if not all, black. Big deal. Certain groups gravitate toward different fields of interest. And that's perfectly ok.

People seem to forget that "diversity" is more than skin deep.

The Oscars are nothing more than a big room full of narcissists celebrating the greatness of each other.

I haven't watched the Oscars in too many years to count. As far as movies are concerned; i want to watch what is really good, not who is black, purple, yellow, homo and more. Diversity never works. Just give us the best...

1:04 Poor baby. You have to speak to your rotten kid. Bet he grows up to be a horrible person like you.

A disease?
You're pathetic. I feel sorry for your kid. And no I'm not gay, I'm married with kids who are well rounded and aware of people's right to be different and have different preferences. What would you do if your child declared they were gay when they got older? Shun them, tell them they're diseased?
You're a miserable excuse for a human being.