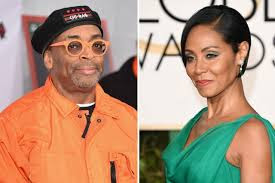 Jada Pinkett Smith and Spike Lee have announced that they will not attend the Oscars this year after the Academy snubbed actors of colors in its nominations.

Smith, whose husband, Will Smith, did not receive a nomination for his critically acclaimed role in "Concussion," posted on Facebook that she will not "allow" people of color to be ignored anymore.

"At the Oscars...people of color are always welcomed to give out awards...even entertain, but we are rarely recognized for our artistic accomplishments," she wrote. "Should people of color refrain from participating all together? People can only treat us in the way in which we allow."

Will they give back there Oscars that the white oscars gave them?

nobody wants them there anyway!

What's next a Quota for blacks what a joke, let's force people into mandating people to like your movies because there black.

I don't see them boycotting the NBA,OR FOOTBALL 95% black?

So now they want affirmative action In Hollywood now!! good luck with that. I'm getting so sick and tired of hearing about black PRoblems. I'm a white middle aged uneducated professional But I don't see no silver spoon in my mouth. I had to work for every damn thing I've had.During my college years under Carter all the colored people went to school for free. because I was white middleclass. i was screwed, Had to borrow my tuition since my dad cOuld'nt afford it, and he made just enough to eleminate free handsouts.

Frankly I could give a crap. Show is not worth watching and basically a fashion show. This race card show is wearing thin with most Americans.

This is insane malarky. Boycotting the Oscars because no black actors are represented? Then why not make Oscar worthy films with black actors in them?

Spike Lee has made some impressive films, maybe he should stop being a celebrity and go back to filmmaking. Perhaps then, there will be something to hoot about - until then, not interested, could care less.

They've got the BET awards, which as I recall excludes whites, and plenty of other self-celebratory blackfests.

They can't seem to grasp the fact that they are not some universally superior species. There are individuals of every race who excel at certain things, and those who suck at it.

Part of their problem is, on the whole, an utter lack of humility, grace, and true introspection.

Now watch what happens on the outside of the building prior to and during the Oscars.Certainly nothing as dramatic as what happened outside of the Miss Universe Pageant,but there will be picketing and arrests made.Personally,I feel as though the highest grossing films should get the majority of the awards,but rarely is that so at the Oscars.Those who make the final decisions must have more refined taste than the movie going majority.

Good point 354 Thats reverse racism!!! same old same old tired old argument it's all whiteys fault. However keep in mind that the hidden dangers of the rainbow, has warriors in all facets of our daily lives. Satan lives and works among us on a daily basis. Always divide, lie, deceive, this kinda crap is on his agenda!

Where is WET,
They have BET isn't that Racism.
Starz channel now has STARZ BLK.

While I enjoy movies, I could care less about the award shows and who receives what. There are a tremendous amount of talented people, from all walks of life. Your value of yourself should come from within, not from a committee.

Will is a overrated vs actor plus is son wears dresses, Google it.

Don't watch any awards shows so won't miss that they're missing.

And it's not likely that I'd spend a penny to see anything they were 'artistically' involved with.

I thought the blacks had their own award presentations.

who cares? don't they realize they blackmail nominations every time one isn't deserved?

It a a black comedian hosting it lol.

Who are they and who cares? Have note been to a movie since 1994 and have never watched the Oscars.

She is like Blacks in the NFL saying they are slaves. Really have you seen Will Smith's Estate. Make me a slave please.

This race card and Black Lives Matter crowd are all racist. All lives matter don't they. I guess if your black you can say whatever you want. Funny thing Abraham Lincoln actually wanted to send all Africans back to Africa. Wonder where this country would be if that happened. No offense I have never seen a Black Swede. They have the lowest crime rate in the world and they live well. Just saying.

Will and Jada are close to divorcing over this issue.He looked at it as a reason to improve the quality of movies that people of color play in,and he is absolutely correct.Now he's stuck with either siding with she and Spike or expressing his own personal belief.Imagine living in that house.On top of all that more black actors are jumping in the fray.Not a good time to be Will.