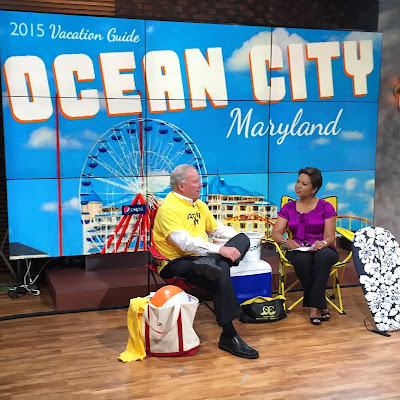 Mayor Meehan visited four of D.C.’s top media outlets, including: WTTG-TV FOX 5, WJLA-TV ABC 7/News Channel 8, WUSA-TV CBS 9, and WTOP-FM. The Mayor’s iconic yellow shirt served as a reminder to all DC residents to put their vacation days to good use this year with a trip to Ocean City.

“Our trip to Washington, D.C., couldn’t have come at a better time with the summer season really starting to kick off for vacationers,” said Mayor Meehan. “There are so many new things going on in Ocean City this year, including our new smoking ordinance and Parkmobile app. We also have an exciting lineup of events in store this summer, like the Ocean City Air Show, which is taking place June 13-14. There’s no better way to spend your hard earned vacation days than in Ocean City.”


Ocean City’s new smoking rules, which took effect May 1, are intended to help keep Ocean City’s beach clean while accommodating both smokers and nonsmokers. The Boardwalk is a smoke-free zone, and designated smoking areas with waste receptacles are provided along the beach and 15 feet off the Boardwalk. With the Parkmobile app, Ocean City visitors can add more time to their parking meter conveniently from their phone.

Mayor Meehan also promoted the town’s new Trip Planner on ococean.com, which allows visitors to plan the perfect trip to Ocean City by helping them find the right accommodations to fit their budget, things to do, and places to see. Users can also create an itinerary to share with family and friends for a perfect, stress-free vacation.

That's just what we need more DC and Baltimore thugs visiting the beach and starting crap.

He was only a deterrent! The council and mayor are the plague of ocean city.

Real smart, Rick! With all the problems we've been having with urban thugs down here, not only are you advertising in their 'hoods, you're going down there to get them. Are you taking a cue from Ireton, i.e. mess up a perfectly good small town according to strict democrat policy (tax, tax, tax, then cater to criminals), in the hope of being noticed by your programmers in Annapolis? Is that the best way to move up in MD politics?
You already made a mess of the town and its economy by overbuilding. The crime is through the roof (I suspect you use similar number-fudging a la SBY). You proudly passed the new far-left-darling smoking ban and daily scour the streets for more tax possibilities. How about doing something about the traffic?
Are you not going to be satisfied until all the decent folks who used to flock to OC are all in Myrtle Beach, avoiding the crime, traffic, high prices, and mostly the thugs who are all over the place 24 hours a day. The shooting on 8th St. last night - your kind of people?

Avoid OC at all costs..libtarded smoking policy was the final straw. So much for the second hand smoke argument..its outdoors.. you NAZIs will never get another dime from me or my friends

Even West OC is a mess nowadays. Crowded bars and MSP lurking at every intersection.

They are the worst. They will pull you over on a straight up lie. One pulled me leaving Greene Turtle and tried to claim that I was doing 10 over. He was passing me just as I was leaving the lot and immediately swung a u-turn and got 10 inches off my bumper. Since I was JUST pullin out of the lot as this happened I set my cruise to the exact limit. As soon as he realized I hadnt had anything to drink he cut me loose immediately and looked for the next person to pull his b.s. on. The worst is Sutka he is like an SS stormtrooper. Why even go through the charade, pretending that there is such a thing as probable cause, just stand right at the front door and arrest anyone leaving with car keys.

I wonder if he brought up the shooting at 801 Atlantic Ave last night.. yes that is the boardwalk..
Or the robery at gunpoint today on the boardwalk and 26th street.. the kid was trying to buy drugs and the dealer beat him with a pistol... any arrests???

If he really wanted to show what oc is all about he should have left the taffy and brought liqour, a muscle car (exhaust removed), crude t-shirts, 50 Russians (who share a 2br apartment), penicilin and morning after pills. Hasn't been a family resort in 10 years. I wouldn't spend all that money on dirty old hotels, nasty Sysco junk food and over priced drinks when I could go to an all inclusive resort in Mexico with airfare for cheaper.

Well you may not have heard about the new THIRD hand smoke, invisible cigarette residue that can make children sick. Another crock of $%#&. Demonize smokers because politicians would never defend us. The public should be thanking us for paying $4.00 a pack tax that is put towards our public schools. At a pack a day that is 5% of a 28k/year income, just in cigarette tax, that we pay over and above our already outrageous tax rate. You are all welcome.

Did the mayor tell her about the assaults graffiti shootings noise thugs in oc ?

Rick, serious message. You better get back and do something with the half ass city manager. Who refuses to work and is allowing the departments to fall beyond repair. Open your eyes, it's about to crash.

2:54 (the first one) I was coming here to say the exact same thing. Keep them in DC!

4:18
I think we need to pay them more if we want more work for them. I mean they don't make that much now right?