'No one helped her': NJ woman murdered by ex while awaiting gun permit 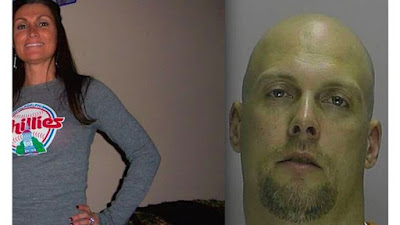 Carol Bowne knew her best shot at defending herself from a violent ex was a gun, and not a piece of paper. And it was paperwork that left her unprotected when Michael Eitel showed up at her New Jersey home last week and stabbed her to death, say Second Amendment advocates, who charge local police routinely sit on firearms applications they are supposed to rule on within 30 days.

Bowne, 39, had a restraining order against Eitel when he killed her in her driveway last Wednesday, but she was still waiting for Berlin Township Police Chief Leonard Check to approve the gun permit she had applied for on April 21. Tragically, she had gone to the township police department just two days before her death to check on the status of her languishing application. In another indication of her fear of Eitel, Bowne had recently installed surveillance cameras around her home, and the equipment recorded the 45-year-old ex-con attacking her as she arrived home and got out of her car.

“She should have been granted that permit in a timely matter, especially given her status as a domestic violence victim,” said Evan Nappen, a New Jersey-based attorney who specializes in Second Amendment cases.

she wouldnt have gotten one in md either

We have the right to carry guns , when will you guys get it ?

who has the right>?

They don't get it 10:48. They listen to these cops saying federal doesn't trump state. Your an idiot if you don't carry these days. Fight the unlawful arrest or allow it to happen. You will win in the end. Then slap a major lawsuit against the arresting agency.

But the police say THEY will "protect" us! They do SUCH a good job at that. Just ask the lady who PLEADED with them. Isn't THAT their reasoning and logic for denying citizens with NO CRIMINAL RECORD the RIGHT (read that again, cops and "representatives") to be able to defend ourselves against criminals who LAUGH at your gun "restrictions", permits, training requirements, fees, laws, waiting periods, background checks, and every other obstacle you put in our way to make sure WE are the victims of any thug that comes along. Because you "care" so much for us.....
The police carry their guns 24-7 and your "representatives" have small armies with the latest and greatest weapons to protect THEM from criminals (constituents are probably more scary to them than "criminals". Many of these bloodsucking, hypocritical "leaders" carry their own handgun!!
YOU, the stupid, ungrateful, incapable and
worthless serf, just have to learn to live with it. You can't be trusted with the rights that GOD has given you.
And you keep voting for them.
Keep cheering.
I'll keep my guns loaded and within reach at all times. And have NEVER thought I needed your PERMISSION. And I'm not alone.

Nope 1:13 you liberal retard. The cops are just like everyone else. You can not be every where at once. Are you huffing paint or just that stupid. Sorry to say most cop bashers are ex-cons or future cons. My guess you are an ex-con. All my borthers ib blue deak with loser like you on the daily. You are the minority. The majority in fact supports police because they have no reason to fear the police.

Own a gun protect you and yours. Stop bashing the cops they had nothing at all to do with this womens murder. Anti cop rhetoric.

I know who you are stop popping pills and drinking loser

1:47.....learn some spelling and grammar.
And you CERTAINLY don't know "who I am". If you did, you'd know that I don't even eat food that has any liquor in it, much less drink any alcohol. And you wouldn't have to "guess" that I'm an ex-con. You'd KNOW that I'm not. You'd also know that I'm a registered Republican voter and NOT some liberal idiot. And, that I'm most assuredly much smarter than you and your family combined.
You'd also know, like the dozens of cops who have already searched every criminal data base, every MVA file, all social media accounts, all possible court house records, and even land records and tax files, that I have NO --- that's ZERO ---- criminal or civil record.
They would LOVE to be able to post some disparaging report to show some kind of resentment for "interacting" with the Gestapo. Because the goons that claim to "protect" us are so full of themselves that they think anyone who criticizes their aggressive, deadly behavior is an "ex-con" with a grudge. Wrong again.
You are SO stupid that you missed my point entirely. Which, by the way, is this --- "we, the people", barring a criminal conviction for a violent crime, DON'T need a cop or a politician to tell us its okay to exercise our God given rights. AND we most definitely have the right to say that the police, who are REQUIRED BY LAW (read that again, Forrest) to respond to a gun permit application within 30 DAYS, regularly and without remorse, CONSISTENTLY violate that law. Did you miss that point or are you just too stupid to understand that?
My guess is that YOU are about 5'5" and overweight, got your ace whipped a lot, have an IQ in the high eighties, live with your mom, and think the Constitution was a book written by Stephen King. Which was just too hard of read for someone at your intellectual level.
It would be best if you just allowed people to THINK you were a big dumbace, instead of posting that error filled, misspelled, grammatically and factually incorrect rant and PROVING it.
Finally, I'm NOT afraid of the police and have no reason to fear them. I DO obey the law, except for the ones that "infringe" on my rights (I'd reference that quote, but it I have a feeling it would be WAAAAAY over your head).
Sign your name, you sissy.

Ex or future. That's all we are to you officers. Convicts and income. Why we law abiding citizens can't freely carry. Your guns are for your protection not ours! You'll show up after the fact not before! I will gladly be judged by 12. I don't care if I raise to the top court to be exhonorated before I'm carried by six by any thug, or tyrant!

Having a gun and GETTING TO IT in a life and death situation are two different things,especially when the attacker has no fear of death.In addition,women have to deliberate too long before they shoot.I think that's called compassion.Men shoot first and ask questions later.That being said,it's arguable that a gun would have saved her.

Sorry to disappoint, but some of us don't have to deliberate before preserving our well-being. Threaten me, you are going down. Too many people do not practice situational awareness and unfortunately, some pay dearly for it.

2:49 I tried to locate Imclain in numerous locations. Sign your name sissy lol. You may want to check your grammar and punctuation before you call anyone else out. This is a Blog not a term paper. I think that guy struck a nerve you are usually not quite so obnoxious. Can you get your head through a standard doorway lol

And that makes it right?

The police chief should be punished. Take away his gun for 2 months and let him work the streets. See how he likes the outcome.

I guess nothing can be done to the people that didn't bother to help this lady. This is awful.