Ever Have One Of Those Nagging Pain In The A$$ Mother In Laws? 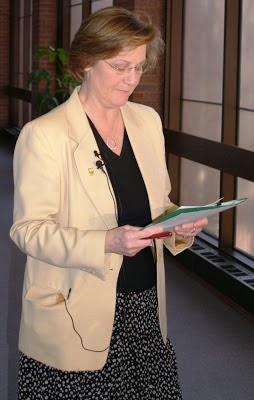 You know, the ones that believe they are always right, mingling into your personal business, nagging at anything and everything and just won't go away. That's what Barrie Tilghman reminds me of.

Today Barrie Tilghman voices her opinion in the Daily Times ragging, (once again) on Terry Cohen and the City Attorney situation.

Barrie, there's a reason you are no longer Mayor of Salisbury. Please, just ride off into the sunset and leave the dead bodies behind while we spend millions of dollars trying for years to clean up your mess.
at 3/23/2014 08:00:00 AM

Used toilet paper has more value than her opinion. One need look no further than how Sby began it's downward spiral with this 'brain trust' at the helm. The quintessential democrat-everything they touch turns into a pile of crap. Look at the WWTP. Anyone with functioning brain cells would have gone out and investigated municipalities satisfied with their WWTP's and hired that company to build the one in Sby. It's like the MD health care website. Instead of hiring the company that launched Amazon, etc the democrats I charge hire some fly by night company that's made a mess of things. It's time democrats face it. They are intellectually inferior and it shows everyday.

If she were my mother in law hell would freeze over before I'd admit it. If she does have children they need to pull her back in the hole she's emerged from to prevent further embarrassment to the family. She is a nothing. Just look around at the poverty, crime, blight that's become Salisbury. It's lies on her back. She helped create it and she owns it. That's her legacy.

Barrie Tilghman can't get over bashing Terry Cohen either. Her minions smeared Debbie Campbell. Then the are the lies she told about Tim Spies that made the front page.

And the WWTP! 9:23 is so right there! Barrie Tilghman saddled us with that monster!

Amazing for someone who helped plunge slumsbury into the crapper you would think she would be hiding in some hole and out of site out of mind.

Group examples can be cited for all of the above...and I'm not talking about any specific race - just this voting block!

Right 11:21. That "voting block" has some real issues. There is no gilding the lily. We are surrounded by the proof. Look at the inner cities. They are war zones and who has controlled them for generations-democrats.

Tilghman's editorial is not the biggest piece of trashing ever to come from her pen. She'd already done that while sitting as mayor, hiding behind her mayoral cloak, coddled by the editors of the
Daily Times, supported by the short list of moneyed Salisburians, of whom she is a leading member and whose pockets she lined while in office at the expense of every single other taxpayer in the city.
Her opinion is just that, an opinion.
Having never sat on the other side of the fence, and having wielded unchallenged power after taking that power away from the people of Salisbury, and then miserably failing at it, still believe that completely controlling all aspects of city government, usurping any and all power from the electorate, even by unscrupulous means is the path to which the city should return and remain.
Her legacy, as Joe has ably pointed out, is sixty years of multimillion dollar annual debt that will continue to be paid by our great-great grandchildren, an attorney who continues to be on the payroll because of an incredibly foolish contractual mistake that he himself wrote and she herself signed off on, and a bad taste in the mouths of Salisbury taxpayers and residents that just will not go away, no matter how many times they brush or rinse.
It is somehow fortunate that she emerges from her self-imposed shadows to render her opinion today to remind us of how much we lost while she was at the helm, of how manipulative and scheming and power drunk she was as a mayor, and of why we applauded when she left.
She must never return to our local politics, even as a member of the least influential board or commission, for appointing her is to subscribe to a return to views and actions that are both poisonous and debilitating.

I agree that it was wrong to change the charter because personalities can't get along. She is right about one thing: change the people, not the charter. It goes along with the raise issue. Vote for or against the raise based on the office, not the current people in the office. Too many let emotions guide their governing.

12:01 You talking about Tilghman or Sauerbrey? Sounds like you have summed up both of them pretty well.

Is she on Crack.

The change didn't have to do with a particular person, rather putting a better set of checks and balances in to place. However, it is now apparent that while it was a good try and did provide some improvement, it didn't insulate the taxpayers against having the office of the Mayor abuse his/her access to city legal services and run the bills up. The mayor and his new lap dog Stevens have no idea how to run a business, let alone a city. Neither did Barrie Tilghman. Joe neglected to include the millions of dollars she gave to friends for developer reimbursements. Barrie Tilghman, Jim Ireton, Jake Day...all cut from the same cloth.

1:05, read 5:38's comment, which is right. I remember this fight very well. It was not about personalities. Whenever Barrie Tilghman wants to get people off the real issue, she whines about "personality conflicts." She cares so much about the charter, but remained silent as Ireton abused it. Anyone remember how big the attorney bills were under Barrie Tilghman's leadership? The double-digit tax hike in one year? Yes, Barrie Tilghman should lecture everyone more about how she cares about the taxpayer!

Barrie Tilghman care about the taxpayers?

This is the woman who PUSHED FOR A FOOD TAX IN SALISBURY!!!!

She got us Wi Fi under the bridge.That should count for something.

The legislative body is where laws are created. Why on earth would you restrict a law making body from legal council? She's a never was POS.