Our Trash Has Become A New Ocean Ecosystem Called "The Plastisphere" 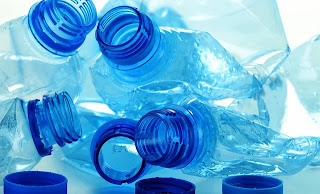 Sure, we all know pollution destroys ecosystems, but, for better or for worse, pollution can create ecosystems, too. The billions of tiny pieces of plastic that are now floating in our oceans are exactly that: a novel ecosystem humans have unwittingly made by throwing away too much plastic. Microbes and insects that might have no business thriving in the middle of the ocean suddenly have found a new home amidst all that drifting plastic.

If you took a boat out to the so-called Pacific garbage patch—a swirling region of the ocean where plastic is trapped by wind and ocean currents—you won't find anything resembling a "garbage patch." The water would actually look quite pristine—until you drag a net through it to reveal floating flecks of plastic, mostly glitter-sized or smaller. The amount of plastic in the region has grown 100 fold in the last 40 years, but it still really doesn't look like much. Yet these barely visible pieces of plastic are completely remaking the ocean.

Sea skaters, for example, have found a plastic breeding ground paradise. The water insect skims across the ocean surface eating plankton and laying its eggs on the hard surfaces of flotsam, which is now in abundance as plastics have taken over our world. A 2012 study found that skater eggs increased with microplastic pieces in the ocean. Occasionally, bigger pieces of plastic will show up enveloped in thousands of sea skater eggs, like a one-gallon plastic jug covered with 70,000 of them, 15 layers thick.