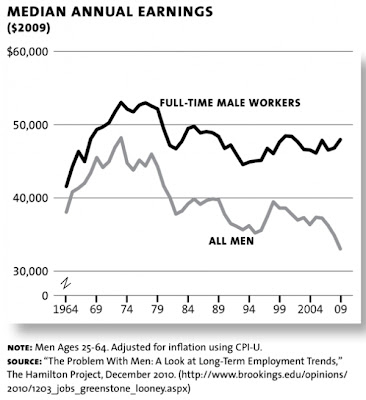 And there has been a huge outgrowth of men who aren’t in the labour force. In 1954, 96 percent of American men between the ages of 25 and 54 worked. Today, that number is down to 80 percent. That’s a humungous decrease.

The question is why.

That is correct. Men have failed to adapt to the orchestrated social changes brought about over the past decades by the likes of the Rockefeller Foundation, the Ford Foundation, and the Trilateral Commission.

These changes include convincing all women that they had a right to work. Now, instead of being taken care of, American women find themselves in a position of HAVING to work. And work they do, at less pay than men. The men?

They no longer work since they failed to adapt. Funny isn't it?

It is funny. The rich folks ended up well off because of this so called social change.

It's the end of centralized economy and the beginning of the third industrial revolution.