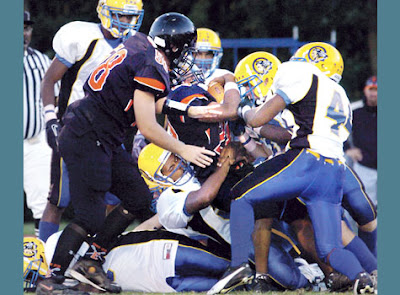 Salisbury News has learned there was a huge fight at last Friday Nights Wi Hi Football Game. We're told around 100 kids got into a huge fight amongst rival team fans and with Sheriff's Deputies.

Because of this brawl, a proposal is now on the table being hushed up by the Board of Ed. They are debating changing the game time with local rival High Schools to start the games at 5:00 PM instead of the traditional 7:00 PM start.

This will certainly outrage parents wanting to see their senior students play but it is what it is.

It's unfortunate that so many kids of this generation could spoil such a great "Friday Night Lights" tradition but the safety of innocent people getting hurt must be the Board of Educations first priority.

So to those parents who want to complain, start at home by getting control of those out of control kids. Don't point the finger at the Board of Education.

Keep it on the field!

Happens about once a year locally it seems,where a hundred or more youths get into a brawl.It might be at an under 21 club,a sports event,coolege related or whatever,but it seems spontaneous.Complaints about time adjustments should be directed at the kids involved.The board does'nt always get it right,but they do their best.

Thats Wi-Hi for ya. Thugs ruin the game.

If elected as mayor, what would or could or can or will or suggest you do to help these out of control kids and the parents whom made these kids and whom WILL NOT TAKE responsibility for and as usual try to pass the blame onto someone else for their mistakes or failures?

The reason for this question is becasue of the loser parents whom just let their kids run amuck and think its ok until they do something drastic and then blame it on something or someone else...

"People do what they do, knowing they can, because of others who are scared to standing up" PERIOD!!!!!!

The players will be exhausted at 5 after school if they are friday games I am all about adding extra security instead. Again we adults NEED TO CLEAN UP OUR OWN LIVES when adults bully via spoken word and or written word we are condoning their bullying. Keep it clean adults, and no i don't need any bricks thrown at my glass house I AM SADDENED BY THE BEHAVIOR OF TODAYS YOUTHS a few thugs start things then of course defending honor comes in... and you have a brawl and the innocents get hurt. LEAD BY EXAMPLE Thanks

Games on the western shore were moved to saturday afternoon because of similar circumstances. It wasn't just wi-hi, it could've been Parkside or Bennett just as well. There is no accountability for their actions.

10:59 It does not matter who they were playing, It ALL comes from the home!!! Parents need to be PARENTS instead of being their child's friend!!! Also, Hold the parents accountable as well since we are responsible for them!! Just remember, the way your child acts is a reflection of you!!!!

Which players were responsibe for the brawl? Who, if anyone, assaulted police officers, coaches, etc. Name names, expell them from teh team and that will show that we have no patience for this sort of thing. That is much better than punishing everyone. Who did ths? You're out!

anonymous 11:49, they are monors, first of all. Secondly, YOU didn't put up your own name, yet you demand we publish others? Get a grip.

change the games to saturday's. the so called thugs will still be spark nocking from the night before.

Joe said: "...It's unfortunate that so many kids of this generation could spoil such a great...tradition..."

I'm hearing a little 'old geezer' tone in this story and in the comments. Everybody seems to be saying "these kids today".
I'm not sure where most of you grew up, but where I was from these dust-ups happened pretty much on a regular basis after most high school games. These were predominately white (some black), middle (and some upper) class schools. Granted, we didn't have knives or guns - but there were fights. Suspensions were handed-out if the perps could be identified, but that didn't happen much.
So.... Everybody relax. Things haven't changed. It's not the end of the world. And if you were raised in a school environment where this NEVER happened, I feel sorry for you. It was a rite of passage - and even sometimes quite a character builder, too!
If you're wondering - I'm 66 years old...and, except for a permanently crooked nose, survived many post-game activities!
Put as much visible security as possible in the area of the game...keep it mostly under control.

there have always been fights at a football game. The question is how does it turn into a massive brawl of 100 +. Who watched as it grew to that number. There's a good chance it didn't start out 50 vs 50 or whatever the ratio may have been. Now , just like many other examples we are talking about changing the way the run because of an isolated event. Yes, it's not a good thing to have happen but to go changing policies over a fight is nuts. I would rather them talk to the deputies and encourage them to stay focussed while they are " so called " watching for things. Most of the time they don't seem to be paying much attention and are only reactive and not proactive.

It's obvious they need a slaughter rule in High School football as many team run the score up. I seen both kids and parent upset with running the score up. In my opinion no different than bullying.

Keep in mind that students are never held accountable for what they do. Somebody else or something else is always to blame.

The administration was just looking for an excuse to change the times to 5PM otherwise they would have changed it to Saturday games. Think about it, school gets out at 2:45 PM and the game starts at 5 PM. The can go home 2 hours sooner and still have their Saturdays free. Has nothing to do with fights. MORONS!!

I can't believe you morons....safety comes first. If they move the games to 5, I am all for it. Most other sports start earlier than that so what is the big deal. If you are a true parent, you will make it work for your kids. Doctors don't have special hours to accommodate you so why should schools and sports.

Agree with Anon 1:47 Much better time!

More scurity? And whi is going to pay the overtime for the deputies? How about school officials who can be on the scene and able to identify the the students or people invovled. Then charge them later, but then again our judicial system will not do anything. Oh yea you can expell them, suspend them or whatever but don't forget about "no child left behind". The school system will still be responsible for them even if they are expelled. The persons involved really don't care and their parents probably don't either. Oh and god forbid a deputy sparys pepper or tases a student or someone else to get them under control. The liberals will want his job. Its a lose lose situation. There is no right or wrong answer. They should charge who they can and be dont and let the school board handle the rest. Changing the times wont matter, who believes that. If they wanna fight their gonna fight no matter what. Slaughter rules. Ehhhh whatever, its a game running up the score so what its a game. Maybe they should just ahve a running clock after a certain score is reached. If you can't ahndle getting your arse whooped then maybe you shouldn't play. There are some HS teams that wouldn't make it out of the first quarter if there was a slaughter rule. What kind of experience would that giver them. And then you say well make it go at least a half. Oh my then it prolongs the arse whoopn and makes the children feel bad. Its the entitlements that kids EXPECT today, everyone gets a trophy everyone gets praised for participating. BS that kind of mentalitity breads a lazy society.

From what my kids have told me the fight started between a couple of parents from both schools so maybe the kids shouldn't be getting all the blame here.

Call in the Delmar High football team and fans. They'd have this situation under control in no time.