On Sunday, April 1, 2012, at approximately 7:36 p.m., Ocean City Police responded to 90th Street and Coastal Highway for a vehicle collision. When officers arrived at the scene, they observed a 2002 BMW, which had crashed through an iron fence and struck a residence. 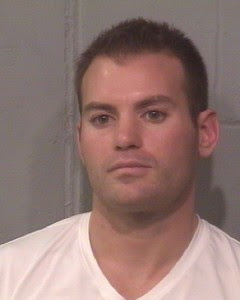 The initial investigation revealed that the driver, who was later identified as Charles Allen Fogel, 29, of Bethelem, PA, was traveling northbound on Coastal High way when he attempted to turn southbound. During the turn, Fogel ran into a metal fence before striking the brick stoop of the residence and stopped his vehicle. Fogel, who was not injured during the accident, was arrested and charged with the following traffic violations:

After being seen by an Ocean City District Court Commissioner, Fogel was released on his own personal recognizance.

Told you yesterday, Pennsylvania drivers are the worse. LOL

Sooooooo he could have killed people while driving drunk but hes let out on his on pr.....wow