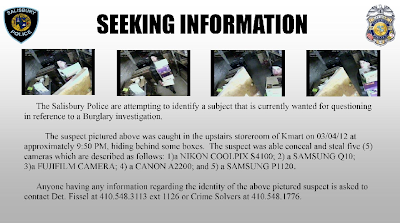 On March 18, 2012 at approximately 2:20pm, officers were conducting a stop sign enforcement detail in the area of Zion Rd and Centre Rd. During this detail, officers observed a vehicle being operated by Polk fail to make a complete stop at the intersection. Polk was stopped in the area of Kiley Dr and advised of the reason for the traffic stop. During the contact with Polk, a strong smell of raw marihuana was detected. Polk was also extremely nervous during his contact with the officers.

Permission to search the vehicle was obtained from Polk. During the search, a large quantity of marihuana was seized. The amount seized was indicative of distribution. Polk was released to the custody of central booking.
at 3/20/2012 10:07:00 AM

10:17, "yo" is an abbreviation for "years old". My question on this post: If Kmart is not in the Salisbury city limits, why is the Salisbury police handling the crime there? Wouldn't that be the County's jurisdiction? Anyone know? Just wondering!

10:40, Kmart is in the city the pond next to it is the city-county line

how about a better pic of the robbery suspect