And so the escalation ends, if only for the time being, as Iran chalks a (Pyrrhic?) victory.

Why? Because the world slowly realized that the potential surge in oil prices would tip a world already on the verge of a recession even deeper into economic contraction. Not rocket science, but certainly something the US president apparently has been unable to comprehend, especially if hoping that he would merely transfer exports from Iran to his close ally Saudi Arabia which would cement its European market monopoly even further. Or, perhaps, someone just explained to Obama that Embargo in January + QE3 in March = No Reelection...

In other news, crude is now dumping. 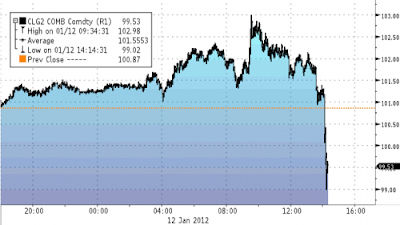