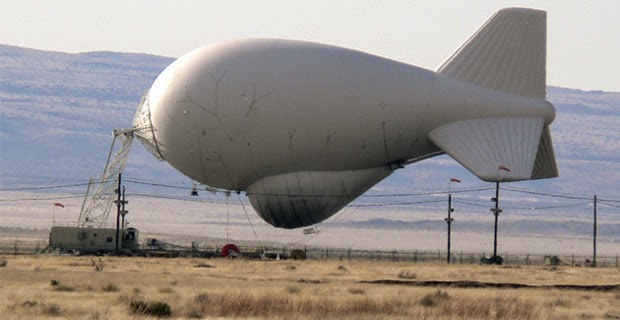 In just a few days, the Army will launch the first of two massive blimps over Maryland, the last gasp of an 18-year-long $2.8-billion Army project intended to use giant airships to defend against cruise missiles.

And while the blimps may never stave off a barrage of enemy missiles, their ability to spot and track cars, trucks and boats hundreds of miles away is raising serious privacy concerns.

The project is called JLENS – or “Joint Land Attack Cruise Missile Defense Elevated Netted Sensor System.” And you couldn’t come up with a better metaphor for wildly inflated defense contracts, a ponderous Pentagon bureaucracy, and the U.S. surveillance leviathan all in one.

Built by the Raytheon Company, the JLENS blimps operate as a pair. One provides omnipresent high-resolution 360-degree radar coverage up to 340 miles in any direction; the other can focus on specific threats and provide targeting information.

And it can be shot down by a local hunter as target practice. More wasted taxpayers dollars.

Ha, Ha! We had them in the Florida Keys on Cudjoe Key to intercept drug boats. Gosh, they kept getting shot down for some reason all the time! They got better at it, though, by just shooting the tether and releasing the blimp into the airspace! Here goes another 2.8 BILLION dollars, once, twice, thrice, four, five......Great idea!

The DEA finally gave up because of the costs of losing the blimps and the airspace hazards! LOL!

Trying to recoup a fraction of their money. A lot of wasted money that never was finished in time to use. Every contractor had a war tool

Guess WHO will be under surveillance....

So, been there, done that, failure made it unaffordable.

What idiocy! Stop the madness!

I feel so OOOOHHHH! That's EXIT ONLY!