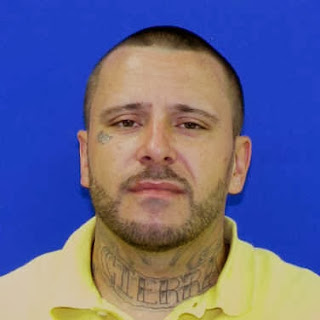 NARRATIVE: On December 10, 2013, the Maryland State Police and the Worcester County Bureau of Investigation were called to respond to the White Marlin Mall, 12641 Ocean Gateway, Ocean City, Maryland, regarding an assault that had occurred. During the investigation, it was found that a member of loss prevention for one of the outlet stores had attempted to stop a shoplifter from fleeing the business. The suspect exited the store and was followed by the loss prevention employee.

During the investigation, the Worcester County Bureau of Investigation received numerous phone calls and tips regarding the identity of the suspect. Investigators were able to use the information obtained to positively identify the suspect as Mark Lee Donoway Jr.

Based upon the investigation, an arrest warrant was obtained charging Donoway with Assault 1st Degree, Assault 2nd Degree, Theft, and multiple traffic violations. Donoway was apprehended in Wicomico County on December 16, 2013, by members of the Capital Area Regional Fugitive Task Force. Donoway was taken before a District Court Commissioner and was ordered held on $100,000 bond.

Check out that awful neck tat.

With all of those tats, he looks like such an upstanding citizen......NOT !,

Think he can find a job? lol

You people know nothing about him and its sickening how your so quick to judge by appearance alone smh! And we wonder why our justice system is such a failure because of close minded individuals such as yourselves!!!! I know him personally and know the entire situation of what really happened and why, and the "loss prevention" employee went way far out of his job duties and wasn't hit he dove on the car Rambo style without identifying his self!!!! He's not guilty of the assaults but if negative and close minded individuals such as the ones who have left these comments are a jury of "his peers" then he doesn't stand a chance of a fair trial! And his neck tattoo is his daughters name ignorant people, I swear!!!!!!!!

Since when do tattoos make you not an upstanding citizen?!?!? I'm a teacher and covered with tattoos so by your logic all people with tattoos are white trash?!?

So having his daughters name across his neck is awful! Who are you to judge! People need to learn not to throw stones at glass houses you have no right to judge anybody by appearance! And I will let my fiance know just how awful his neck tattoo is :-)

I guess if he wasn't shoplifting he would not be in this position. But no one is talking about that. Let's just blame the loss control guy.

4:09
I'm not sure where we are going to find 12 people for a jury that would be his 'peers'. Guess he'll just have to settle for 12 basically normal people!

Alleged shoplifting so unless you caught him in the act as just a loss prevention employee not a real officer of the law he has no right to touch him or dive on top the car unidentified like your Rambo! But his guilt or innocence will be proven I'm talking about you negative closed minded individuals judging him because he has tattoos and claiming he's white trash tattoos are an expression of art my entire body is covered and I work a full time job! But my entire neck is covered as well but I guess that's just "awful" huh?! Before you point the finger and judge someone make sure your own hands are clean!

Since most of the "Criminal" element of society has their body covered in degusting tats, it stands to reason that he also would be judged a criminal by his looks AND his actions!

If I was his spouse,I sure would not be on here defending him for stealing! I would be mailing divorce papers to his jail cell!!!!People like you who attempt to justify crime are as bad as the actual criminals.I guess stores should just let people steal what the hell they want to and not try to prevent losses so those of us who earn our money by working instead of stealing and scamming can pay more for stuff!No offense because I have tats also,but I have never met anyone with a face tattoo who was not a lowlife or a criminal.

We all know there are good tats and bad tats. I don't think that one falls in the good tat category.
I don't have a tat issue, I have a crime issue.

If innocent, why did he leave??

Well that's funny. Your "marks wife" yet your going to let your "fiancé" know....well which one is it? Are you his wife or fiancé? Or can you not decide, or is it too complicated. I bet you are his baby mam....er, I mean "wife"...or, fiancé...whatever. All the same! Just like the excuses!

The other page indicates a tattoo shop that doesn't seem to really exist, or I just can not find anything on it.

People who force others to view their 'art' each time they walk in public, commit 'alleged' crimes, runs away when confronted, disregards others safety when fleeing, and have similar upstanding folks defend him and his actions, while ridiculing public safety, customs and courtesy, and we are to believe him/them and ignore the facts of the case?

I doubt they can find 12 'peers' for a jury unless they take them out of the work release unit. And yes, loss prevention employee's have the authority to stop, detain and search suspected shoplifters, especially on the stores property, which includes the parking lot.

But keep on searching for justification of this stellar citizens actions. And being some of you so freely admit to knowing this guy and defend him, I question your integrity as well.

Do you each have your own trailer or do you share the same one?

But it's the publics' fault for being close-minded and judging from his appearance and actions?!

Too bad, so sad, but guess what? In cases such as this, the public is almost always proven correct in its judgement of people by appearance and actions, and the associations of like minded individuals like yourselves.

When they get done looking at him, maybe they should cast an eye your way. No telling what they might find.

If you go on the judicial website this guy has a rap sheet a mile long.

He was previously released from jail Dec 2102.

There is a CRIMINAL Issue here. This guy has a rap sheet mile long, 55 plus cases. But he is a really "nice guy" because he has tattoo of his daughters name, Really? For those judging person by his tats, get a grip, no need to go there. Something tells me this "outstanding citizen" will be spending Christmas in the slammer.

You don't get bail set at $100k for shoplifting or assault. This guy is a turd of society.

Hm...for once I think this might have been a joke.

People who have tattoos that can't be covered by normal clothing - I.e., tattoos on their face, neck or hands - are usually trying to make a "statement" to the world. don't be surprised when the world reacts to the statement.

Little wifey or whatever you are, crawl out of your bag of weed and bottle of pills for five minutes and go find a man that's worth defending.

Mark's Wife -
I see conjugal visits in your future.
This trip to ECI may be a bit longer than the last one.

Anonymous OhBama Crooked Bastard said...
There is a CRIMINAL Issue here. This guy has a rap sheet mile long, 55 plus cases. But he is a really "nice guy" because he has tattoo of his daughters name, Really? For those judging person by his tats, get a grip, no need to go there. Something tells me this "outstanding citizen" will be spending Christmas in the slammer.

Our society has long ago been forced, intimidated, ridiculed, (pick a word or make your own), into not judging, condemning, ridiculing, (again pick your word), certain people and actions of others.

Instead of holding people to a certain acceptable norm, we are told to embrace everyone, accept everyone and whatever behavior and lifestyle they may display without question or judgement.

People like this are what we are left with. We don't know him, don't judge. It's his daughters name, it's acceptable. He is expressing himself, don't silence.

That may be nice for a sci-fi movie but not so much for a functioning society. Sure, everyone should be allowed to express themselves, make a statement, whatever, but doing so without any limits causes their 'statement' to be an eyesore and indicator of other issues, usually negative.

They comes a time when they cross a line of decency, style and class. I believe this line has been crossed.

A quick online search reveals that it is really quite tragic...
They have had a marriage license since March but can't find enough time that both are out of jail long enough to get married.