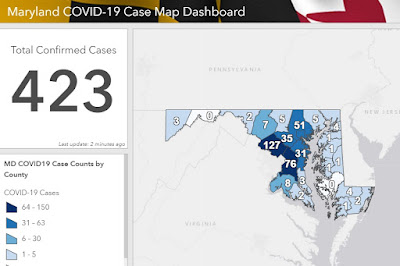 I don’t find these numbers credible. What are others thinking?

Hopefully all will recover from this. The amount of infected walking around is probably and statistically staggering. If they would do testing around here we would know even more. This side of the bridge always gets forgotten about sadly.

I cannot speak for all, but i'm almost assured most (including I) would be inclined to agree with you 100%. No test = low numbers.

Me neither 10:19, either no one is testing quick enough or someone is not reporting

This is fake, Wicomico has more than 4 cases, Everyone I know works at the hospital and in the medical field!!!! there are more than 4 who tested positive or is sick...

What’s incredible about this? These are just the confirmed cases. The actual number of cases is certainly vastly higher.

10:29 also the way they report these cases is dubious and they don't even count the people who have it but show no signs!!!! The estimate 40% of people are this way...

China is doing the same so their numbers are low and stay low but its a lie, there are some 21 million people dead or missing... How do I know??? I am not f'ing stupid, and if you look at how they track their everyday lives, thanks big brother, you helped on this one, their cell phone numbers dropped by 20 to 30 percent... Everything is done on their phone, as they now have digital currency... So even if you take out the poor, or sick who cant use phones, there is sum 5 to 6 million people not using cell phones for the past 3 to 4 months which concludes they are dead.... So why is China saying only 100k to 200k are affected and the numbers are going down or no new cases, yet when someone releases a video of more new cases, they go missing????

But hey you all what that here too, socialism and dictatorship...

I mean look at the damn article posted before this one at 9:52, says 5TH case in wicmico county so clearly the post after this one, at 10:17 is wrong...

Not credible in that it's much worse. No testing here on the eastern shore. Surely more like 30 cases in Wicomico county. Stay home except to get food. Go at off times. and don't get near people. PLEASE leaves kids at home. They are into everything in grocery stores. I've made numerous people mad asking them to get their kids away from me as they were bunping into me , etc. But I don't care how mad they get. I'm in my 60's and don't want them near me.

10:44
The results from the state has a cut off time. If cases come out after that they can't update the entire website after a certain time.

There are more cases in the County you can be assured of that. They are NOT testing many people. I know of at least 2 people that they refused to test.

Don't forget how the Eastern Shore was called the Sh!those side of Maryland...if it ain't in Baltimore, it doesn't count seems to be the prevailing thought process...

These numbers are the number of confirmed cases to date of people who have tested positive for the virus. The number is growing because testing is becoming more available across the state. There are labs across the eastern shore as well as hospitals that are testing people. No can get tested unless they have DR. orders to have the testing done. I do agree that many more people have or have had the virus, some people may have had it and recovered totally unaware that the was the cause of their illness. Also keep in mind that out of the 423 confirmed cases 4 have died but some have completely recovered from the effects of the virus. People relax use common sense obey the guidelines

Not at all credible. These are only people tested. There are MANY more untested people being told to stay home and self isolate.

Also the virtual doctors visits for symptoms because the people are not being tested if they have mild symptoms then they are not reported as positive.

What happened to Montgomery County... Oh sorry, they above all this

10:46, I get that your mad about the kids being in the stores but some people don't have a choice. I'm stuck with my kids at work because the daycare closed as a precaution. Did it ever occur to you that some people don't have a choice? And yes I try to keep his hands off of things and keep him away from everyone, but the stores still have a lot of people in them an that is darn near impossible. I have to get groceries too! and I am limited on when I can be there because, again, I still have to work.

It's not like I have a choice, I have no one else to watch him!
maybe you have never had kids, or never were one ?

Let's give peace a chance and love thy neighbor, when this stuff blows over we can rejoice and party like its 1999

Kids will be kids. They are inquisitive.