SHE’S BACK The endlessly unlikable Hillary refuses to leave the stage. 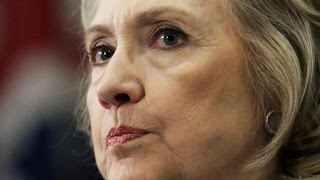 No matter how much sane Democrat strategists desperately want her to go away, Hillary Clinton refuses to leave the stage.

“As the 2020 presidential race ramps up, plenty of top Democrats we talk to would prefer new energy and faces to Clinton nostalgia/redemption,” Axios reports.

Eighteen months after the American people told Hillary exactly where to go, the soulless political operative the great William Safire called a “congenital liar,” is everywhere. Promoting her whiny What Happened memoir and hurting her party by keeping her almost innumerable misdeeds front and center. Likening Republicans to Klansmen and Nazis. Supporting the left-wing Resistance to President Trump. Embarrassing her fellow Democrats with her abusive rhetoric aimed at half of America.

In recent travels overseas, Hillary has been badmouthing President Trump and her fellow Americans. During a March visit to India, Hillary viciously unloaded on her enemies – in particular, the 63 million Americans who voted for President Trump in 2016. Ordinary Americans are pessimistic, racist, sexist hicks, she said.

It's just that she owes sooo many people that she has to stay in the public eye. Besides, it's about all that she can do, having never developed any other worthwhile skills. Even as a three time First Lady (AR & US) it wasn't about serving, it was all about her.

I hope her, Nancy and Maxine goes on tour together in September. It would help republicans immensely.

Let her rant. The more public she is, the worse she looks and sounds. And she doesn't even get it.

She is being advised by someone at a very high level to stay in the race.Someone is taking advantage of her ignorance & has convinced her that it's not over.I know prompting when I see it and I think all or most of you do as well.

They are able to use "Hillary-ness" for a long time.
They spent a lot of money on these clones, and they need to get their money's worth.

She has no skills, zero respectability, unladylike, racist, falling down drunk, dementia, foul mouthed, has run down every Democrat in the 2016 election except herself, gave all the uranium we had over seas, numerous deaths that can be traced back to Bill's terms in office, is responsible for 4 Americans killed in Bengazi as Secretary of State. The Clinton Foundation has $$$$$ but when they left the Whitehouse they had no home and no $to buy a home in NY but now have a mansion in NY, she called all the democrats during the 2016 election "deplorables". She should be deported or put in a mental institution. It's a disgrace that she is paid huge amounts of $ for public speaking. Someone check the taxes they haven't paid please, and put her behind bars along with Bill. That's just for starters!!!!!!!!!!!!!!!!!

Bill needs to take her out back and do whatever it takes.