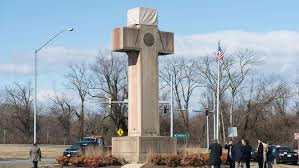 The Supreme Court ruled Thursday that a Peace Cross war memorial on public land outside Washington, D.C., can stand, determining in a 7-2 decision that it does not violate the Constitution.

Residents of Prince George’s County, Maryland and the American Humanist Association had sued to have the cross taken down, but the court determined that factors including the history of the memorial support the notion that it is not religious in nature.

“For nearly a century, the Bladensburg Cross has expressed the community’s grief at the loss of the young men who perished, its thanks for their sacrifice, and its dedication to the ideals for which they fought,” Justice Samuel Alito wrote in the court’s opinion.

Another report of the decision has Associate Justice RBG (really batty gal) contending that a Christian themed monument disrespects any Jewish names inscribed. By her 'reasoning' all military graves should be demonumented at the individual graves unless the buried deceased had authorized a marker with a religious connection. That's the mindset of the prog/liberal/anti-religion/socialist/state id your daddy crowd.

I challenge all here to read all 86 pages of the decision by the court. In fact, 12:23... I think you will find that Kavanaugh also recognizes that this symbol disrespects those not Christian.

Also, Ginsberg pointed out that grave sites for soldiers not able to come home were given grave sites, and the government took painstaking details to be sure Jewish soldiers had Jewish markers, and Christian soldiers had crosses.

The court argued that this is most certainly a Christian symbol, but it serves a secular purpose.

What this decision was NOT is a blanket approval to start erecting Christian monuments on government land as anyone sees fit. It does seem this case erodes away a little more at the Lemon test, if not throwing it out all together.

Some justices argued that there was no standing for this case, but it was not part of the ruling.

While many in the Christian camp will herald this as a great religious liberty victory, they will do so not knowing what the ruling actually says, most certainly it will be in conflict with what they think it means.

7-2? who were the 2? most likely two of these three kagan sotomayer ginsberg?

Justice Ruth Bader Ginsburg took issue with the notion that a cross could be secularized just because it serves as a war memorial.

This woman is sick. I could have predicted that she would be against this. The constitution says the government will not infringe upon the rights of the people to practice their religion. Once again, this old liberal bat takes the radical position

And her comments are ridiculous. Since when is she the arbitrator of what is not suitable. Hey, if a bunch of Jewish people want to honor me by putting a Star of David by my grave, that doesn’t dishonor me. In fact it honors me - they are using the highest form of their faith to acknowledge me.

But, radical thinking (and that is what RBG is) says I DECIDE WHAT IS BEST FOR THE PEASANTS.

Imagine a radical, extreme view, and that is what RBG will side with

Finally, it seems that the tides are starting to turn towards a pro libertarian movement

Wouldn't it make better sense to use iconography that represented all Americans, and, how do you defend that Christian iconography is a better choice than inclusive iconography?

It doesn't need to be replaced. It serves the purpose for which it was erected. It has been there nearly a century. Don't apply todays rule to 100 years ago.

Secular - denoting attitudes, activities, or other things that have no religious or spiritual basis.