We recently discovered that Facebook deleted two video posts from the PragerU page for “hate speech,” and subsequently censored 15 more posts from public view - meaning zero of our 3 million followers could see these posts. 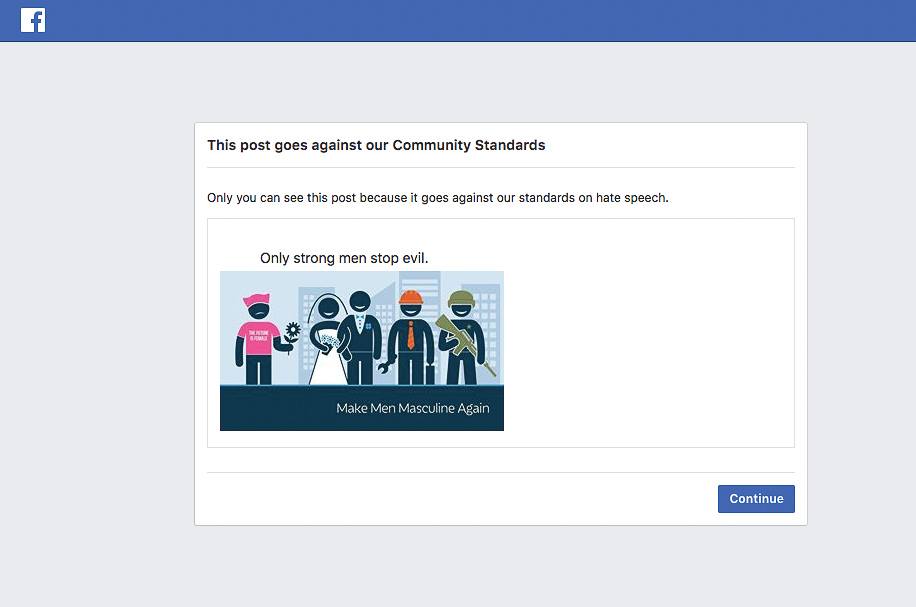 Screenshot from one of the two removed videos for "hate speech"  - a video about why we need more masculine men.

While we’ve experienced blatant discrimination from Google/YouTube, which is why we’ve filed legal action against them, this represents a whole new level of censorship by Facebook.
Not only are they obviously ratcheting up their algorithms to target mainstream, conservative content and labeling it as hate speech, but they are now completely blocking our posts from public view. This is shocking and it should deeply concern every single American.
We reached out to Facebook and their initial response provided little clarity saying they would get back to us in another two to three business days, which in the world of social media might as well be an eternity.
However, after media attention on the issue started to gain traction - Facebook finally responded after 24 hours saying that removing the videos was simply a “mistake.”
Does anyone really believe that removing two videos as “hate speech” and subsequently censoring 15 more entirely from the public was simply a mistake?
It’s not a mistake.  It’s deliberate censorship of conservative ideas - especially effective platforms like PragerU as we continue to reach millions of young people with our videos.

It’s imperative that we continue to fight back, stronger than ever before.
With your help, we can continue to spread awareness about the censorship of conservative voices from big tech companies and we can ensure millions of people will continue to hear the ideas that have made America great.
WE WILL NOT BE SILENCED.
at 8/18/2018 10:38:00 AM

I just posted this on FACEBOOK. Got the announcement in my email. I hope EVERYone on this blog will copy and paste and put on FACEBOOK...Inundate them with this message.

Don’t use Facebook for anything and you can’t be their slave.