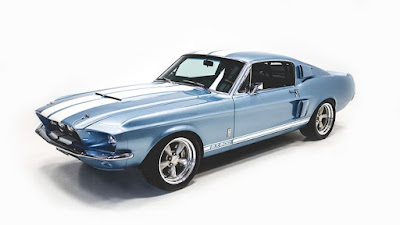 Ford may get around to building a new Shelby GT500 one of these days, but now you can buy a new one that looks like the old one.

Revology Cars has unveiled at the SEMA show in Las Vegas an officially-licensed reproduction of the 1967 version of the classic muscle car built on a modern platform.

The GT500 features picture-perfect styling, but comes powered by a new Roush Performance supercharged 5.0-liter V8 rated at 600 hp and 475 lb-ft of torque.

The double wishbone front suspension and multi-link rear with Panhard rod and adjustable coilover shocks were developed to give the car 21st Century ride and handling characteristics, and it comes loaded with power everything, navigation and a Bluetooth connection.

Getting rid of the kids and getting that!!

For YEARS I have NEVER known what to get my great husband for Christmas. I KNOW THIS YEAR!!

My neighbor had an original . he would take it out of his garage every Sunday, run it for 1/2 an hour and put it back. Original EVERYTHING - even the tires. I have no idea how he kept them from dry rotting.
Yeah, just the sound got you exited!!