The ‘Fight For 15’ Continues In Maryland General Assembly 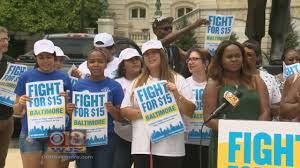 ANNAPOLIS, Md. (WJZ) — Following the footsteps of Baltimore City, there’s a move in the General Assembly to raise the minimum wage to $15 dollars an hour. This would be the second new state minimum wage law in three years.

“No one who works hard should have to live in poverty,” says Justin Vest, with Progressive Maryland.

On Tuesday, the fight is for $15 continues.

“Because the simple reality is there’s not a single country where a working family can earn less than $15 dollars an hour and actually afford the necessities of life,” says Vest.

And if you get $15 minimum wage, your food costs go up, your clothing costs go up, and everything else increases and you end up making less after deductions and expenses. The only winner here is government that collects the taxes. That's why liberals are for it!

I don't get that from SSI and I worked all my life. Appears to be discriminatory towards me.

What do you people expect? Vote in Democrats knowing they don't promote free market enterprise and think government is the answer to every human woe. Then you're shocked they want to do stupid idiotic crap like this which only stunts business and prohibits economic growth. Why don't you start by not voting in any more Democrats and adopt a more econ-centeric attitude towards business, i.e. common sense, then see what happens.

Sitting around complaining about it only amplifies the issue but never solves it. The only way to solve is in the voting booth. Put your mouth with you vote is and vote No to Democrats and their big government failure.

Aah, Progressive Maryland, the Communist arm of the Maryland Socialist Democrat Party. Ever thought about reducing all of those Taxes imposed on us by OweMalley? By jumping to $15/hr prices of all goods and services will go up, companies will cut down number of employees, but who cares, right? MD Democ-rats think they could get more Taxes that way, but guess what? Tax on Zero $ is still Zero. Just ask Seattle, WA hows that working for them?

I have voted in all but 1 election and that was a primary in 1985. I believe I have done my part since I have voted since 1970. The only thing in MD is not an equal opportunity state for politians and the voters desire. Central and southern MD has always ruled MD. People should study history of MD.

It has to be for everyone farmers also can't just be for business.