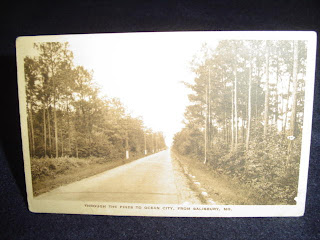 It has long been a bone of contention with Eastern Shore natives that they have to contend with “come heres”. They have a good argument in that people come here from off the Shore because they like the life style, the climate and the amenities. But the problem lies in the fact that as soon as they get here, they treat the locals like a bunch of bumpkins and try to change things. Before the Bay Bridge was opened in 1952, the Eastern Shore was fairly isolated.
I remember my grandmother telling me that the Depression went over Salisbury virtually unnoticed. We had everything we needed without outside help. She said the only difference was that more men showed up at her back door asking for some work to do so they could earn some food.
The Eastern Shore had plenty of things to eat that are grown right here on the Shore. There were fish aplenty wherever you wanted to go to get them. The Atlantic Ocean was bountiful, as well as the many rivers and streams for fresh water fish. My grandfather used to go to Roaring Point down by Nanticoke and fill a bushel basket with rock fish in a half hour. I never saw a can of cat food until I was grown. All our cats were fed fresh fish.
For those who chose to hunt their food, there were deer in the forests. Rabbits and squirrels also were a staple in some families. In the spring and fall the Atlantic flyway sent enough ducks and geese over the Easter Shore that you could get all you could carry home any time at all.
The late Bill Phillips from Party Line on WICO grew up in Caroline County. I once heard him say that he never saw any money growing up. When it came time to go back to school at the end of summer, his mother used to go to town and barter eggs and butter for his new school shoes. Everything else he wore, she made. Many a farm wife had their husbands bring home feed sacks from the farm supplier in identical patterns. Many times she would accompany him to make sure he got the right pattern. From these feed sacks, she made her dresses, curtains, bed clothes, shirts and what ever else she needed.
What we had here on the Shore was enough to sustain the population. With the Bay Bridge and now the Bridge-Tunnel, we have lost forever that feeling of independence we knew for so many years.
at 3/11/2017 09:00:00 AM

Wow , the very best post you have done George.
May hurt some feelings , so what.
If you think about it , we are all from somewhere other that the shore. Our heritage goes back to many countries.

Wouldn't change a thing about Eastern Shore values. That why I am a come here.

What a a great case for self-sufficiency over so-called progress.

Ain't it funny that all the liberals are trying to get us to grow our own food now?

Maybe the Shore was "liberal when liberal wasn't cool." (Apologies to Barbara Mandrell!)

Thank you for a very nice post Mr. Chevallier. My mother said the very same thing about the depression. She grew up in Snow Hill and is from a family of 12 children that had a farm. She will be 88 this August.

It is just too bad we can't grow our own food any longer. The weather modification programs have changed all that. It hardly ever rains now.

Good post but I've always thought the Eastern Shore's isolation before the Bay bridge was always exxagerated.You always had water and road transportation to Wilmington. Railroads came. Farmers and watermen have always depended on other markets to sell there products and get cash and goods.Chincoteague VA never left the Union during the Civil War for fear of losing the Philadelphia and New York markets for their seafood.

Change is constant , the seafood in the bay has been raped and overfished , both sides are responsible. I moved here 35 years ago , I was treated like pure crap and and getting anyone to hold a conversation was impossible.
It goes both ways , we are all come heres .
I believe the reason we weren't accepted is our knowledge of other things beyond watermen and farming.

great post. some of these comments are really weird.
1. libs are the only ones that believe in growing their own food. total myth.....
2. 10:15, SOME of the things you speak of came later. for the most part it was as george described in his post. not exxagerated as you say. this IS the way we lived. much is written and passed down about how we lived. there are still many who remember and remember hearing about it.
3. yes, you can still grow a garden and sustain yourself with fishing, hunting for food and having goats and laying hens for eggs (if you live in an area where this is allowed). many people have been doing this for years and many more are starting to do it as they see what's happening to our great land.
4. as far as the come heres are concerned; they are fine as long as they come here to enjoy the uniqness of what the shore has to offer and not "make it into their image".
thanks again george for a great post.

i often wish it were that way now!!!

1:09, You are sooo right. I hate seeing the change of our Great way of life back then into what it's become now----Progress? Progress for what?

If I make it through the night, I will celebrate 80 years on the Eastern Shore, all in Salisbury. I had a great childhood, helped my Dad and Granddad on their farm and thoroughly enjoyed every minute of it. There were many changes on the Shore when the Bay Bridge was opened, not all of them good. But I still love Salisbury and I have many so-called come-heres as friends. One of your best posts ever, George.

Everything you descibed is just the way it was when I grew up on the other side of the bridge.Change happens some good,some bad,but it happens.Greed is what usually ruins things. When the "come heres" arrive,some of the "born heres" figure out ways to cash in on the "come heres"and in order to keep cashin in they attract more "come heres".Then a sleepy little strip of sand becomes Ocean City and the rest is history.

Happy Birthday to you...

I don't mind come heres- until they start rattling off the list of things "you should have". Why do they move here and want to change the area? Assimilate!

I'm a come here many many years ago. I get pissed when I see the changes being brought about! Some of us came here for the very lifestyle you wrote about!

10:34 am . . . seems you think the Shore is only watermen an d farmers? They are hard working great families, BUT, how do you think all the buildings were built, how did Salisbury become a County Seat, and other things? There were brickmasons, carpenters, lawyers, doctors, teachers, plumbers, electricians in our midst too . . . just like anywhere else and, yes, some of our people went on to the arts and specialized skills.

Have you been here lately?

10:34 AM Yes. Location was not the only thing isolated. So was forward thinking. One of the most closed minded communities I have ever lived in. To this day it is still an ignorant topic in a job interview.

Explains a lot of why it is now a ghetto, as life and technology moves past you all at an alarming speed.

I was raised in Snow Hill and graduated from SHHS in June 1960. Subsequent to a short stint at Salisbury State College, I enlisted in the army. completed officer candidate school, military intelligence training and finally, flight training. I served as a military Intel officer and pilot for 26 years and resided in 12 states and several foreign countries including 30 months of flying combat missions in Vietnam. After retirement, I served as a police officer in Las Vegas and as a federal special agent in San Diego, Los Angeles and Las Vegas. I often thought of returning to the Salisbury area after retirement, however, by accident, I discovered an island off the coast of Washington State that is the closest thing to rural Snow Hill and the Eastern Shore that I ever imagined could exist. I've been residing here for ten years and every day, I'm reminded of how much I love it here and how much it feels like the Eastern Shore circa 1958. It pains me to read about the violent crime that is prevalent over the entire shore. I still have several friends residing in the Snow Hill and Salisbury areas and I feel sorry for then having to deal with the threats to their safety. The relatively small demographic that is responsible for the majority of violent crime barely exists here. It has been my experience as a police officer and federal law enforcement officer, that over 85 percent of gun related violence and other forms of violence can be attributed to that small segment of society. I recall that as a thirteen or fourteen year old in Snow Hill, walking down the highway near my residence and being stopped by s MD State trooper. He merely said "don't shoot near the highway" and drove off! I understand that these problems have come about incrementally and probably most local residents just have accepted the increase in crime as a routine thing and just go about their lives pretending not to be potential victims. It is very sad for me to see what in going on back there and to realize that there is no going back. The political elite and even law enforcement have let things go to far and get completely out of control. Everyone seems to be afraid to stand up against the multicultural and diversity template that is promoted by all of the leftist media. I feel extremely sorry for those, like me, who recall how it was in the 40s through the 60s.