A true legend in martial arts and Salisbury native
passed away yesterday. 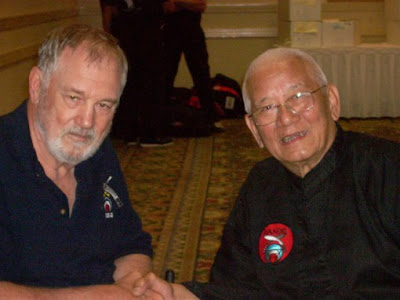 
Grandmaster Sayagyi/Sensei Harvey P. Hastings III – Sensei Hastings is an 8th degree Bando Black Belt instructor, and both a National Bando/Lethwei (kickboxing) and World Heavyweight Kickboxing Champion. His full-contact career consisted of 62 wins and only 2 losses. He is also a 7th degree Black Belt in the Isshin-Ryu Karate-do system, and a Black Belt in Judo. He is known as one of the Bando systems ‘Gentle Giants’, as he personifies the ideal Warrior; capable of great passion, courage & energy when dealing with the threats/challenges of combat, yet also capable of great compassion, tolerance & patience when in the presence of family, friends, or anyone in need…He especially enjoys Nature, being constantly physically active, Friendship, and writing poetry. To learn more about this unique & amazing Bando man, go to this site:

Harvey was a good friend and mentor. He is already missed. Best to you, warrior. Look after us as best you can.

Master Hastings was born in Salisbury, MD on December 15, 1935. He started boxing age 9 at the Salvation Army Boys’ Club. He entered the National Guard 1951-1953, and the US Marine Corps 1953-1956. During his time in the Corp, he boxed for the Marine Corp and won several tournaments between 1954-1955.
He studied Judo under Nick Allbert, 1953-1955, and received his Black Belt in Judo, 1954. He received Black Belt in un-named (later recognized as Gogu Ryu) Korean style under Major Leong (ROK) in 1954 as well.
He began his study of Isshin-Ryu under Master Tom Lewis and was awarded Black Belt in the mid 1960’s. He considered Isshin-Ryu his Heart and primary style of Martial Arts. In the early 1970’s, he received Black Belt in Bando under Master Muang Gyi.
Master Hastings won the US Heavyweight Kickboxing Championship in 1973. His Full contact fight record as an adult, both amateur and professional (boxing, kick-boxing, and pro-karate): 64 and 2…lost first and last matches. One of his many adventures in life was to ride a bicycle from Maryland/Delaware line, south to Key West, Florida, then north to Chattanooga, Tennessee, and then back south to Atlanta, Georgia, stopping and teaching at many Karate studios along the way - 73’ 74’ 75’. He furthered his studies under Joe Corley in Tang Soo do in 1975.
In 1975, he founded Florida Karate and Health studios and developed KOBA Ryu style - kicking and training techniques are based on Korean styles. The heart and hard training are from the Okinawa Isshin-Ryu style, the intellectual approach and animal techniques are from Burmese Bando, and the punching and blocking are from American boxing.
He became head official for NKL (National Karate League) under founder Chuck Norris in 1976 as well as became head official and chief architect of rules and procedures for PKA (Professional Karate Association). During this time, he started the Florida Black Belt Association and wrote articles for Black Belt and Official Karate Magazine between 1975-1977.
Master Hastings conducted first-ever sanctioned professional judges and referees school, Fort Lauderdale, Florida, circa 1977. He trained top ranked kickboxing and pro-karate fighters Jerry Rhome, Joe Corley, Steve Shepard, Bobby Sullivan, Tim Hautamaki, Jack Ballard, and Bill Clark.
He was Center referee for many world title bouts featuring fighters such as Bill Wallace, Benny Urquedez, Steve Shepard, Jeff Smith, and Blinky Rodrequez. Television appearances include ABC Wide World of Sports and CBS Sports Spectacular.
He currently lives on his ranch in foothills of Wyoming’s Wind River Mountain Range, Boulder, Wyoming. Although no longer active in the Martial Arts as a teacher or practitioner, he plans to start a book on the subject as soon as he’s completed his fourth novel, Journey to Ecatabana and Palmyra…the second in a series about the Oregon trail written under the master heading of “Passages To India”; both are historic novels. The first two novels, The Graymalkin Comes and Track Of The Wolf Both are modern day westerns.

He was larger than life and will be greatly missed R.I.P. Sensei.