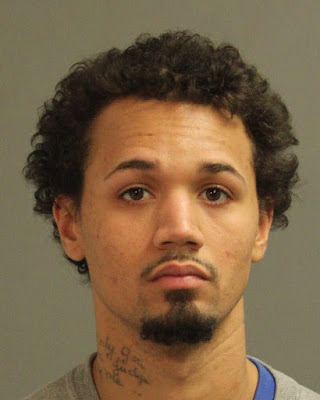 On 06/08/15 an officer of the Delmar Police Department responded to the Gordy Tiger Mart, located in Delmar, MD in ref. to an individual who had been run over by an unknown male driving a motor vehicle who had fled the scene. The victim sustained numerous injuries and was transported to Peninsula Regional Medical Center for treatment. The victim was treated and released.

Subsequent investigation revealed the identity of the driver of the vehicle as Gregory Allen Lassiter, Jr. of Delmar, DE. Delmar police obtained a warrant for Lassiter. Lassiter was subsequently arrested with the assistance of the Maryland State Apprehension Team (MSAT). Lassiter is being held in Wicomico County Detention Center without bond.

I went to a pool exhibition once where a Luther Lassiter demonstrated his amazing skills.This is the first time I've heard that last name since.

I was in the er when the guy that got run over was brought in he was a fellow AA.

I was a server in OC 8 or 9 years ago. A co-worker (an elderly woman) had a walk out. A group of us went outside to see if they were still in the lot and maybe get a tag #. The way the lot was set up we came out and were between the thieves car and Coastal Highway. Fleeing the scene the driver hit me and flipping me onto the hood. The proceeded to powerslide the car out of the parking lot and go full throttle for three blocks. He then slammed on the brakes so hard I tore the entire windshield wiper assembly right off the bolt in my hand as I was thrown forward off the car, which at that point was traveling 55-60 mph. I landed in the path of the car and was run over. The driver raced out of the city leaving a pursuing witness who had been driving down Coastal at the time in the dust. Luckily I broke no bones and was able to get up out of the street on my own (co-workers were all now 3 blocks north of me). The police traced the tag and found the driver and his car, minus windshield wiper, at his home in Millersville. This incident was witnessed by 12 employees and the Coastal Highway driver. The thief was seen on restaraunt survalance tape eating and walking out. He was dead to rights and had the same charges brought up against him as the man in the article.
Now let me tell you what happened after, and what will probably happen to this dirt ball as well. OCs finest offered him a plea bargain down to second degree assault. He took the plea meaning it was an intentional act and I could not purse his insurance company, but if I sued him I would have probably gotten a million dollar judgement that his broke loser @$$ would never pay a cent of. In the end his insurance gave me a "good faith" settlement, of a couple grand of which the lawyer took 33%, and for stealing and assaulting me with a +3000 lb deadly weapon he received... drum roll please... 8 days in jail that he served on the weekends.

5:58, I knew Luther well. He and I played for three days straight back in 1980. One pocket, straight pool and nine ball. Those were the days!

Anonymous Anonymous said...
I was in the er when the guy that got run over was brought in he was a fellow AA.

How do you figure? Idiot troll! Nothing was said to identify.

I'm very sorry for all you went thru. My family has dealt with less serious, but life changing accidents no fault of their own, and it stinks. Let me guess... State Farm Insurance?! They are notorious for this!