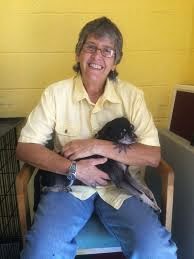 Linda put in her resignation last Friday and respectfully offered a two week notice, the Board asked her to leave the following day. You might say it was all about ego's.
at 3/15/2015 08:00:00 AM

This is so sad for her and the animals. She really cared about the welfare of the animals.

Linda has always been nothing but nice,knowledgeable and cordial to me in the many dealings i have with her from pet shelter to tractor supply.I truly wish she could come back and oversee wicomico county humane society.

What a shame. Why would they do that to her. And we are stuck with another clown at the Wicomico County Humane Society.

Most board members are idiot that have no clue what it is like to run the day to day business but ignorantly feel as if what they have to say is important, when it is not.
Just a big ego boost that is an antiquated system and no longer serves a purpose.
I worked for a non profit with of course a useless board.
Bunch of look at me's that had no clue what it was like in the trenches.
I have no respect for any self serving ego maniac that serves on a board.

I worked with Ms. Lugo when a severe storm came through our area several years ago. Between the two of us, we set up kennels, feed and watered, all the animals and walked all the dogs in the rain. I learned a great deal from assisting Ms. Lugo that day and I developed a great deal of respect for her knowledge, her ability to work through a crisis situation, her ability to speak softly to upset disturbed pet owners, and willingness to teach me. Her organizational skills were outstanding. No animal was lost, all were loved and cared for because all of them came in scared to death. For the next twenty-four hours we labeled, documented, and even called sheriffs when it was obvious some of the animals were mistreated. I also witnessed the mistreatment she received from Rick Pollitt that day. The way he talked to her was terrible. But Ms. Lugo, ever the professional (which Pollitt wasn't) never said a word, she just kept on working. In fact Pollitt very little to help when we reported water was coming into the building through the closed doors. He acted like he didn't care. That day I lost all respect for Pollitt.

I'm telling all of you this, not because I want attention, but to let you know that Linda Lugo is an asset. One that we here on the shore can't afford to lose. She is progressive in caring for "her babies", and she won't let people hurt them. I applaud her and I am grateful for her.

In fact, years prior to this storm, I rescued my dog from the shelter through Linda. That dog lived another fourteen years. To this day, I will always be grateful to Linda for showing me this wonderful dog.

Apparently, no one can work with the Worcester Humane Society. This board is really out there. They had a diamond and didn't treasure it, now all they have is coal. I really feel sorry for the animals because I don't think they will get the proper care they need and deserve.

Linda did a lot to help the shelter but she had enemies who would call the directors behind her back and complain about her. Linda will be missed but I'm sure she wont miss dealing with the board of directors or some of the employees! Good luck Linda - you deserved better !

2:21 has given us the Wicomico, not Worcester, Humane Society information.
Linda has done amazing things in her one year in our county (Worcester). To fill her position and to be fair to all candidates, the board should advertise for a shelter manager who will carry out what the board says to do. An executive director is not what they really want.

Whoops! Sorry. I was momentarily confused. Or longer.

Begs the question what are they afraid of?? What's done in the dark ALWAYS comes to the light.

Linda Lugo is a fraud! I'm surprised there anyone with anything good to say about her. She killed my dog!! I filed a missing report with Wicomico County Humane Society and visiting the Shelter every other day! They swore she wasn't there. Sadie was there the entire time. She asked the secretary if I filed a report, and the secretary said "she didn't know". I put lost dog report in the paper, flyers, endless hours/nights/days looking for her. Then she finally admits after 1 hour at the Wicomico County Humane Society that "we accidentally put her down". They she tried to tell me that her fax machine was broke, etc etc. She kept telling me that I NEVER FILED A REPORT!!! ABOUT AN HOUR later after getting my tears from pouring, she called me on my cell phone then finally admitted that "I know you filed a report", "secretary lost it". Then when I asked her that Sadie was also in thew newspaper ad, and that I literally called every other day to see if someone had turned Sadie (my dog) there, her reply exactly "We don't read the paper". Totally unacceptable. She is a disgrace!!!!!!!

I have had experience with Lugo
lying also.

She knew who to impress & when.

She isn't what she preceves to be.

6:04
I remember your story well. So
sorry you had to experience such
a heart breaking thing.

It should have never happened!!

This is the second director they have lost. After the first one left the place went to hell. They were just throwing out animals to anyone who could fill out and application and pay the fee. No checking out these people or anything. Both of the animals are gone now. This I believe happened before this director came on the scene because it happened more than a year ago, like in Jan of 2014.
God help those poor animals because I don't think the directors care about them at all.

I'm sorry for your loss.

A non profit is only as good as its members.

Few on a board are there to serve and follow the rules. Some have a personal agenda to profit from the position.

When board members are wack, feel they are above the law, weak sheeple or do nothings they destroy the good works of non profits. Worcester County is plagued with them.

So confused about this article. . Where does that s woman work? The comments indicate she was with Wicimico not Worchester,

Worcester County Animal Control are a bunch of nitwits and misfits. Always have been, always will be.

Come back to Wicomico County!!!! The animals here need you. Linda is a dedicated caring person!!! Wish you the best Linda!!!

This is plan wrong. I've been at the shelter and looking over the dogs and found her very helpful and could tell she was a great person.

@6:39 pm. That last director was a total NUTJOB!!!! I am a Worcester County Resident. It was next to impossible to get an animal out of that shelter. We had Doctors in the community that were turned down. Ask about it from the residents who lived her who were practicall begging to get animals and help. And in the end she was fired for embezzlement. You could go in any business in town and always here one story after another of people who wanted to adopt. She an an overload of cat crates piled on top of each other. It smelled to high Heavens.

I don't know Linda personally but I met her once when I wanted to adopt a dog. I filled out all the proper papers and she did care. My son had a dog at home and lives on our property so she suggested we bring my sons dog there so we can see how they get along. It was a wonderful experience and I even complimented her on how clean the place was.

The Problem with the Humane Society Board is the Same Problem with every board in Worcester County for non-profit, the Berlin Chamber, Atlantic General Hospital and so on.., they elect people that have money (the elite) because they need equal morons to do exactly what they say not actually do the job. So you have bean counting nimrods like Michael Franklin with massive cover ups, firing people with more then 10 years (except for the Jack Ass Administration who needs the boot) and it trickles down to even places that seem safe like the humane society. They are all corrupt because there board is made up of rich socialites that only want their name on something so they can dress up and go to fancy parties. And look big. Worcester County is filled with good ole blow job boys. Linda never stood a chance because she actually cared.

Who replaced Linda Lugo? Is this person any good?

It does seem like the restrictions has eased up since Kanille left, but obviously that is not always a good thing.

This shelter is a joke. Hide money, books, no grants ever filed because they can't disclose books. This board is nothing but big heads.

Kelly Austin is the president

Wrong the board is full of ego headed women