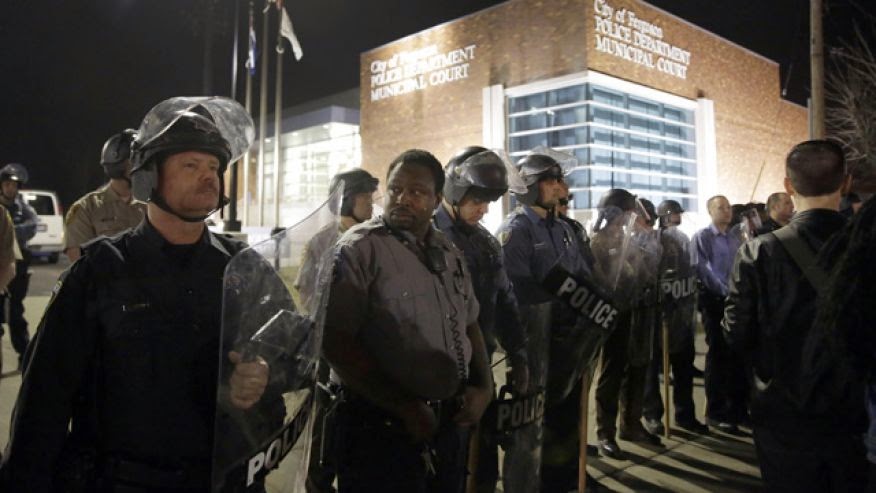 BREAKING: Two police officers reportedly were shot early Thursday outside the police department in Ferguson, Mo. amid protests that followed the resignation of the town's police chief.

The shooting was first reported by the St. Louis Post-Dispatch. Ferguson Police Lt. Col. Al Eickhoff told the paper that he did not believe the officers were from his department and had no information on the extend of their injuries. The Post-Dispatch reported, citing a police source, that one of the officers was from St. Louis County, while the other was from Webster Groves, another St. Louis suburb located south of Ferguson.

KTVI reported that as many as 200 protesters had gathered outside the police station to demand more changes in the city's government after the resignation of Police Chief Tom Jackson Wednesday afternoon. The station reported that at least one person had been arrested and that protesters were blocking traffic on nearby Florissant Road.

You can blame that on Obama and their liberal ass governor.

Every cop in that department should quit. There are plenty more cop jobs out there. Let the animals fend for themselves.

The blood is on your hands, Mr. Holder and Mr. President.

200 people "protesting" at 1am on a Thursday morning.

Every officer there should quit. Let those animals fend for themselves.

This is all Holder's fault. He and Obama biggest racist in the world.

Okay holder how you going to justify this!

Shoot all the protesters.

Proof positive that Ferguson officials can never do enough.Why even try? At least this much violence would have occurred if they had done nothing in the first place.

This will happen in Salisbury.

All Cops should QUIT QUIT QUUT.

Why aren't the National Guard sent there? More lawlessness and e are all complacent,like sheep led to slaughter.Most of us cannot "protest" because we work.How ironic that we are indirectly financing the lifestyles of those who can do nothing but protest and sign a monthly check?

Actually they get a direct deposit 7:57,but I get your point.

This is obamas legacy but he doesn't care. He's an evil man sent here by the devil to do his work on earth.
Speaks volumes as to why he is overwhelmingly supported by the black race and why blacks rate high in all the social ills this country faces.
They do not value honesty as evidenced by obama and his pathological lying.
When honesty isn't valued the whole culture deteriorates.
Funny are those obama supporters who go to church. A real true Christian would not ever support obama and would and is screaming about his indiscretions from the roof tops. A special place in hell awaits all obama supporters because God hates them. He hates fake Christians and false witnesses with a passion.

Cops should pack it up and leave town to anarchy. hopefully that would spread across the entire country.

Cops need to go on strike..

So all this "protesting" is in response to the DOJ's findings that there are racists in the Ferguson police department and the local government...well DUH!! I bet none of the black people there never sent any racists jokes or emails about white people or Hispanic people? Then they talk numbers well I am by no means a math wiz but they say over 67% of the city of Ferguson is black...when if nearly 70% of people in the town are black, doesn't say minorities-meaning including Latinos or Asian residents just black, so you tell me who is more likely to be arrested...the people who make up 70% of the community or the people who make up 30% of it? There is corruption in every government, everyone knows this! Obama and his DOJ had to find something wrong here because all his people are in upstir over the justified Brown shooting because every cop straps on their gun everyday with intentions to shoot an unarmed black man...nevermind he just pushed around a store owner because he caught him stealing and it's on camera. Nevermind Michael Brown was assaulting a police officer who was half his size! I am a racist when it comes to people who make my race look bad! I am white and hell I am ashamed and racist towards white people too because they go out acting like a bunch of degenerates! So no one can tell me they aren't racist because you damn well you are in some sort of way!

All the cops should leave and call in sick, then let the town burn to the ground!

All the officers should quit or call in sick? Ya they should. I'm guessing the morons saying these things haven't read the DOJ report on the oppression the cops placed on this community. The way this community was policed can only be Compared to the kgb or the policing of the deep south (aka Mississippi) in early 20th and 19th century. You can only oppress a people so long before they rise up and don't take it anymore. Was the shooting of the officers wrong? Sure it was ,but was it unexpected? No!

Get real, 12:05. A DOJ report? The DOJ is just another corrupt wing of the Obama regime. That report says exactly what they were told it should say. And how exactly was the community 'oppressed'? EBT cards didn't work? Welfare checks late? No minutes on their ObamaPhones? You know, people are just not buying this crap anymore.

Payback is a bitch.

12:05 The DOJ "investigators" didn't find any evidence of civil rights violations, and they were on a witch hunt to ferret out anything they could. They could not.

They did not like the "guidelines" for so-called "civil rights violations", so they made up their own. And all they could come up with, was a manufactured "outrage" over a couple e-mails only intended for specific individuals.

Their "conclusion"? Some nebulous rhetoric about a vague atmosphere of oppression of innocent colored people. They had to issue some sort of negative "conclusion", to please their DOJ masters.

The DOJ is a joke. Eric Holder is one of the most vile racists in this regime.

We've had quite enough of the hypocrisy, the fictional narratives, the demagoguery, the outright lies, the vile slander heaped upon the real victims, and the negative return on investment in communities that do not care to invest in themselves, and squander the rest.

If you people are still looking to white people to solve your problems, you're going to have to live with our solutions. "Protest" all you want, if you don't like our answers to your problems, quit expecting us to provide them for you.