The stoplight celebrates its centennial 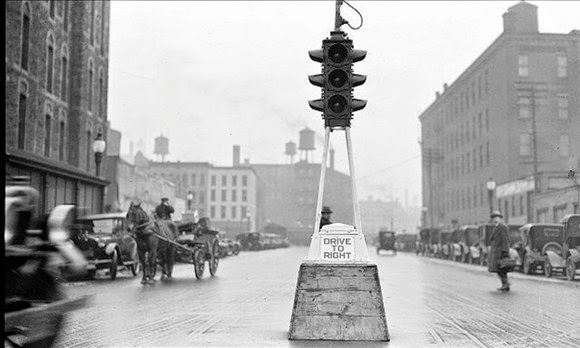 If you've just finished a frustrating commute crawling through traffic, imagine how much worse your daily drive might be without some roadway essentials,
like lane markers, speed limit signs — and the traffic light.

Red, yellow, green, those three colors have become a ubiquitous part of our modern lives, but it wasn't always that way. In fact,
the first electric traffic light didn't make its appearance until nearly a year after Henry Ford switched on the world's first moving assembly line.

As with many breakthroughs, there are plenty of conflicting claims, but historians generally agree that the first true stoplight was installed on the
corner of Euclid and 105th in Cleveland 100 years ago this week.
at 8/16/2014 02:00:00 PM

And that same day a driver ran through the red light causing an accident.

I still don't get the horizontal traffic lights just past the 2nd overpass bridge on 13 going north.Was that just a clever adjustment to keep trucks from hitting them?Every time a wreck occurs at that intersection it's mainly because of a colorblind driver.