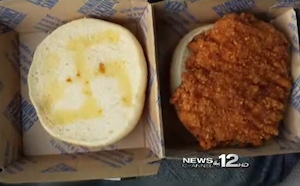 A McDonald’s owner is apologizing and saying a worker at a North Carolina store was fired, after a customer claimed that she found a swastika drawn on her chicken sandwich’s bun with butter.

The woman tells WCTI that she found the Nazi symbol when she opened her sandwich to put mayonnaise on the bun.

“Is this a joke? Does somebody really think they’re funny?” she said, adding that went back into the restaurant to complain, and workers offered to replace it. But she said she’d lost her appetite at that point and wanted a refund instead.

Get ready for yet another court battle where someone thinks their freedom of expression is being denied.

If she wasn't Jewish, I really think she overreacted.

who said the symbol was used as a nazi "hate" symbol? It is also a symbol known for life, sun, power, strength, and good luck. Some only see the negative in life and never the positive.

Who opens their burger? I just eat mine. I'm sure there could be worst things in a McDonalds burger.

If she was anything but a nazi she didn't overreact

10:25, if you think that, May I suggest proudly flying a flag in your front yard with that symbol, or better yet put a bumper sticker on the back of what ever you drive, I understand that prior to WW2 it meant many different things, but it will forever be likened to Nazism. unfortunately so has the Chaplin Mustache, now renamed the Hitler,

The employee deserves to lose their job, but a civil suit would be ridiculous. Awesome prank though.

She was white. She was interviewed at WRAL.