The Mayor's Job Is To Administrate, He's Not Doing It 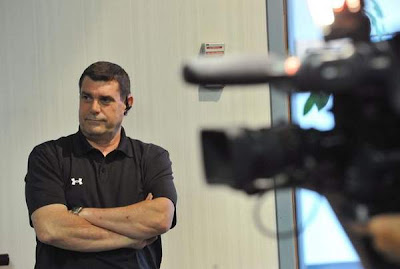 When you get phone calls from people reaching out to you for help, there's a problem.

I received a phone call from the GOB complaining about co-workers spending most of their day on Facebook.

Complaints have been made to Department Heads and they absolutely know this is going on, yet nothing is being done about it.

The problem isn't just on their computers, it extends to people using their cell phones to go on line and chat.

While some obviously think this is OK, I do NOT. Mind you, I don't want you to think I believe this is an exclusive problem to government employees, I do not. I know of several businesses in the area in which their employees are doing the exact same thing.

If I'm elected, cell phones would be for EMERGENCY use only. I'd ask the City Council to set a policy stating as such. Salisbury has a TON of work to get done. If it means there's so much free time in which staff can play on Facebook and the Internet, well, then we'll set new policies, remove those abusers on record, not replace them and perhaps pay those people who DO work hard all day more money, since they're picking up all the slack anyway.


"It's not my election to lose,

it's the taxpayers election to lose."

The irony of this "policy" coming from someone who spends his entire day, every day, on a blog... It's a thing of beauty.

I have known you Joe for several years and in that time one of the things I have learned is that you have no time for slackers. You believe you do the job you are paid to and then some. Get poking that stick in that bee hive!

Your slogan is one of the best!

Well you have placed them on alert. They have until April to straighten up or ship out.

Those same problems exist in almost every business. It is a big problem as work does not get done and business productivity drops. The fact that it's a problem in government is double trouble because it's taxpayers money.

I get PO'd at work when I'm doing my work and co-workers are on their smart phones on and off ALL DAY long.

You can't just fire everyone involved all at once, or nothing would get done at all. However, once you fire the first few, the rest will get the message and either tow the line, or be looking for a new job because they lost their job.

Not giving your employer (in this case the tax payers) a full day at work related business while at work is stealing. People who do this are no better than a common thief.

Not only do some employees stay on their cell phones with boyfriends, playing games, etc. these same people come into work late, take long extended lunches, and leave work early because their friends are in supervison (using the term loosely) they do the same thing and everybody gets away with it. I am not just talking about city employees, but state and county as well. Perhaps, if you have the time and opportunity to do the above, you should put more focus and attention in doing your own work/job and put in 8 hours doing the job you are supposed to be doing.

Joe, I can't think of a single government business reason why anyone would need to use Facebook for their job. This goes the same for most to all businesses. My previous employer through the IT department flagged the Facebook login and blocked it so no one could log into it. The company I worked for had over 32,000 employees, if this can be done in the private sector it should be able to be done in the public sector.

There is almost never a reason for someone to even have their cell phones in work (unless they are awaiting an organ for a transplant.)
As far a Facebook and work? It should be blocked from workplace computers along with alot of other sites.

There is way to much waste in government . I hope you get the chance to fix the problem.

I think you will be a tough boss but fair and balanced.

I have always believed when you are in management, you need to be tough (to make the necessary unpopular decisions), and fair enough to be balanced.
Thank you Joe for running for office, and for listening to the ordinary taxpayer (not just monied named folks in town). The winds are coming and so is change/

On my first day of work 60 years ago my father told me to "give the man is 8 hours". That is exactly what I did for the 50 years that I worked. Good advice I think....

Same thing with smokers. They think that they are entitled to a smoke break whenever they want one while the non smokers get to pick up the slack. And the non smokers can't just get up when they want and stand around by an outside door not smoking. Whatever...

I am a city worker who uses a smartphone to text and Facebook on the job even though I know it is wrong. The truth is that I am completely disengaged from my work although the job always gets done. I would love to have good leadership for a change and a reason to be excited about work again. JOE FOR MAYOR! It's not the worker bees causing the problems, it is the lack of vision from the top.

The smokers do burn me up. I don't have the opportunity to go outside at all yet the same people are outside my office window smokin n jokin every day.

Where I work, some of the non-smokers go on break with the smokers as well..real waste of time..just gives them more time to gossip and stir up trouble for the VERY FEW EMPLOYEES SITTING AT THEIR DESK WORKING!!!!! Management is aware but does nothing.

5:15...seriously, you are blaming your administration for your lazy attitude?

6:42 PM
Yes, seriously I am!!! My attitude is anything but lazy. Tired of all the crap but never lazy. I wonder how much education you posses about leading and motivating people in the work place?

Hopefully you will spray for mosquitoes.

And the non smokers can't just get up when they want and stand around by an outside door not smoking. Whatever...

Yes, you can. You can stand around whining, like you're doing now. Life isn't fair, wahhhhhhhhh.

You were hired to do a job and I'm pretty sure your job description does not include rating other employee's performance.

Do your job and mind your business. Let management, manage.

Or are you saying you know more than your boss?

5:34AM The point here is the the city is not being managed and yes they probably do know more than the boss. There is a problem with any organization that is not properly managed and the city is not excluded where employees tend to rise to their level of incompetence. Meaning they are promoted or hired into a position they cannot handle or are simply not qualified for. This example is called the peter principle- look it up.