The 4 Qualities Of A True Statesman 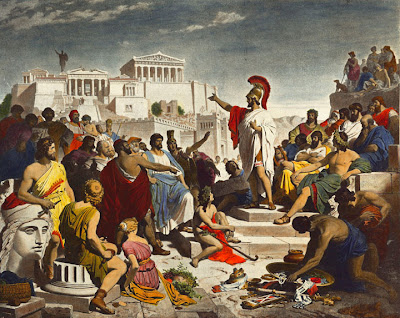 Here in the United States, the inauguration of our next president is a year away, and the Republican primary season is in full swing. Journalists and pundits dissect the candidates’ every speech, appearance, and debate, analyzing what they did right or wrong, and who is waxing and waning in the polls. These talking heads, along with the people watching and listening to them at home, evaluate the candidates on who seems the most “authentic,” had the best line of the evening, or released the hardest-hitting advertisement. The whole thing can oftentimes seem more like a sport or entertaining sideshow than the lead-up to an important election.

So what should the more serious-minded citizen be looking for in the next leader of the free world? What criteria beyond hair and quips might a man use to evaluate and judge candidates for office, or those already in office?

Opinions will certainly differ on such a significant and pressing question. But while I was in college, I was introduced to an excellent yardstick for measuring our leaders, one that has stuck with me ever since.

It was there I took a couple of courses with Dr. J. Rufus Fears, professor of an incredibly manly subject: the history of freedom. One of the things the good professor emphasized to us captivated students was that a politician and a statesman are not the same thing. A statesman, Fears argues, is not a tyrant; he is the free leader of a free people and he must possess four critical qualities:

A bedrock of principles
A moral compass
A vision
The ability to build a consensus to achieve that vision
Let us now explore these four criteria of a democratic statesman in greater depth.

let's pray and believe we will get a statesman this time.