Hundreds of Hondurans head for US border in mass migration 'march': report 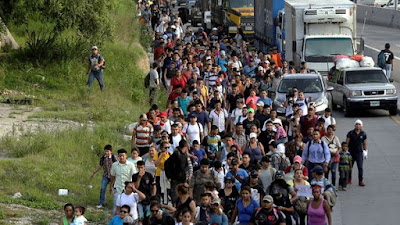 Hundreds of Honduran migrants are headed for the United States border, just days after Vice President Pence sat down with the Central American country’s leader, urging him to take a tougher stance on mass migrations.

At least 1,300 people, including young children, left San Pedro Sula in northern Honduras on Saturday, in what some are calling the “March of the Migrant,” Reuters reported.

Bartolo Fuentes, the organizer, told the news agency that the group plans to march through Guatemala and into Mexico. From there, participants will request refugee status, which would allow them to stay in the country, or they will apply for a visa to pass through into the U.S.

What the he'll happened to claiming asylum in the first damn country they set foot in other than their own? Handle it MAY-HEE-CO!

Fresh K-9 meat! Turn all the dogs loose at the border, nothing they hate worse than a biting dog!!!!

No other country wants them! That's why they try to sneak in here. But even their home countries don't want them back!