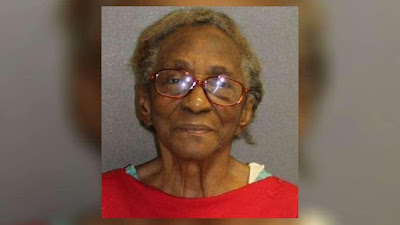 DAYTONA BEACH, Fla. — A 95-year-old grandmother in Florida was arrested Saturday after police said she slapped her granddaughter in face with her slipper before calling 911 to get her out of the house.

According to the Daytona Beach News-Journal, Hattie Reynolds told police her granddaughter, Janeen Williams, 46, would not get out of bed, and that she was "tired of her staying in bed all day soaking up the air conditioning."

When officers arrived at the home, Williams told police she did not want to press charges, but because of "strict domestic violence laws" Reynolds was arrested.

According to a Florida statute, police officers have the ability to determine if an arrest is needed in a domestic violence instance once probable cause is established.

"If your wife reported that you threatened to hit her, you would be arrested because that is a domestic violence assault," police Chief Craig Capri told the News-Journal. "I just feel bad for her but the officers did their job as required by the law."

So wait, if you don't hit anyone, but just say you will, that is assault???? Then I guess if you actually hit someone after saying it, then that must be murder right????

Good for mom mom...granddaughter should have listened to her grandmother.

If she's 95y/o how old is the granddaughter??

Anonymous Anonymous said...
So wait, if you don't hit anyone, but just say you will, that is assault???? Then I guess if you actually hit someone after saying it, then that must be murder right????

Yes, that is assault and always has been. And no, that is not murder. That is battery. = Battery is a criminal offense involving the unlawful physical acting upon a threat, distinct from assault which is the act of creating apprehension of such contact.

Battery is a specific common law misdemeanor, although the term is used more generally to refer to any unlawful offensive physical contact with another person, and may be a misdemeanor or a felony, depending on the circumstances. Battery was defined at common law as "any unlawful and or unwanted touching of the person of another by the aggressor, or by a substance put in motion by him."[1] In most cases, battery is now governed by statutes, and its severity is determined by the law of the specific jurisdiction.

In criminal and civil law, assault is a threat of imminent harmful or offensive contact with a person.[1] It is distinct from battery, which refers to the actual achievement of such contact.[citation needed]

An assault is carried out by a threat of bodily harm coupled with an apparent, present ability to cause the harm. It is both a crime and a tort and, therefore, may result in either criminal and/or civil liability. Generally, the common law definition is the same in criminal and tort law. There is, however, an additional criminal law category of assault consisting of an attempted but unsuccessful battery. The term is often confused with battery, which involves physical contact. The specific meaning of assault varies between countries, but can refer to an act that causes another to apprehend immediate and personal violence, or in the more limited sense of a threat of violence caused by an immediate show of force.

What a bunch of crap!

Should've had her foot in it.