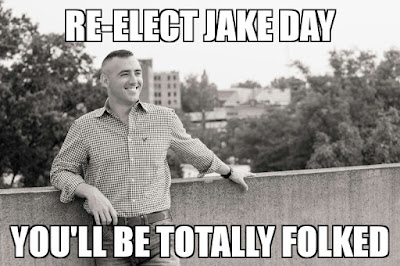 Have you ever heard the term, "RAINY DAY FUND"? Well, what you might not know is that the state of Maryland suggests you, (municipalities) retain between two to four months worth of "savings" in your rainy day fund account.

As of recently the City now only holds around $6,700,000.00. Ladies & Gentlemen, this is a serious attack on your savings. The ONLY way to regain those funds is for Jake Day and Jack Heath to RAISE TAXES!

The mere fact that Jake divorced the City from the County and started creating several new departments and additional/new employees is clear evidence that the City absolutely cannot afford this restructure plan. NONE of these departments and positions were in their budget, so how do they afford such growth. Well, because your local media is so tied to the hips of the Good Ol' Boys they've not checked into this rainy day account and have simply covered it up. What I am telling you on funds is an absolute fact and it could actually be a lot worse.

Yesterday I started a firestorm by exposing the County suing the City. Every single news organization went into damage control mode and bombarded Jake Day's office demanding answers. The City came back with a statement more or less stating they want to cooperate with the County but you have to ask yourself this question, ARE YOU REALLY THAT STUPID? The lawsuit is nothing new to the City and they've had plenty of time to resolve the funds they owe the County, so shut the hell up Jake Day, we're not that stupid.

So to all you City Taxpayers, know your savings account is very quietly being raped by your Mayor and Council President. They are covering it up by the MILLIONS.
at 3/18/2018 10:00:00 AM

ah heck he's got a long way to go.

The city could issue more bonds while rates are so low, if future revenues supported it.
But we need to attract more manufacturing businesses in order to pay for that. Right now, the only major inflows of outside cash is from SU, Perdue and PRMC. Other than that, it's mostly service businesses. You can only recycle locally earned income so many times.
So Mr. Mayor....let's focus on attracting new manufacturing businesses to this area. The spit shine will only go so far.

We ain't got time to worry about this stuff. It's a holiday weekend and we gonna start drinking before getting off work today.

While I'm not overwhelmed by Bob Culver - he is much better than Rick Pollit was...electing true dumbocrats really scares me!

Filling the old Labinal building should be top priority, not the Folk Festival

Gotta vote this guy out

8:08 AM quit whining its too late you are already on the hook for a 3 day festival for 3 years that will cost you MILLIONS a year..

Our savings will be gone in no time.

I hope that Culver stands his ground and doesn't put County tax dollars toward the Festival. It is Jake's mess - don't make the county residents pay for his folly. This is a test of Culver's resolve.

Anybody going to the folk festival? I'm not.

Now he has to fill the toys r us building as well.

Good ole boys start with Palmer and Brad Gillis. Look at the record.

Couldn't agree more. Time to see what Culver is made of

And the Gander Mountain building and the KMart building.

How ironic!! Guess jakey boys daddy got sick of all this type of nonsense Jake put him through so now instead of the "randy day fund" Jake stepped up to the "rainy day fund" and is running through the city of Salisbury savings. The kid gas burnt up close to four million in a first term as mayor? This is shaping up to be bad

A worthless bunch of people at the city of Salisbury.

There is no crime in Salisbury. A homicide on Priscilla st as we speak.

No fan of Day's, like at all, but Toys R US, Gander MT, and Kmart closing had nothing to do with Day. Let's not be obtuse or a mob about our opinions, and be more realistic.