Hey kids. You are nothing but puppets. 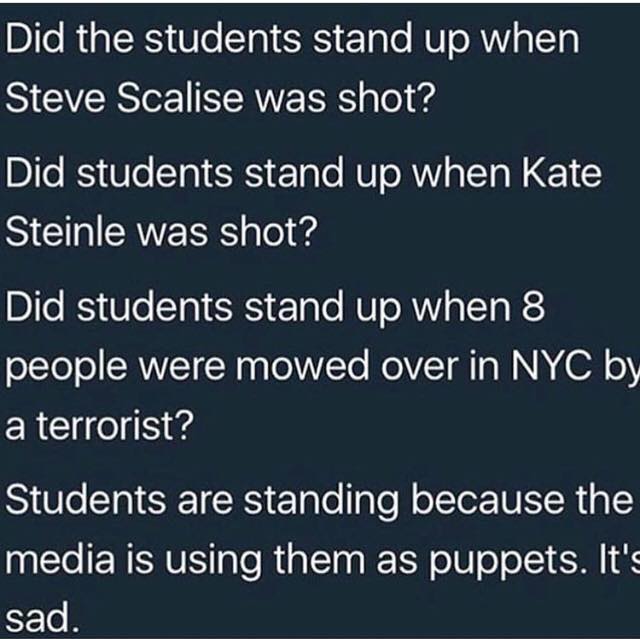 ???? You guys' arguments would be more effective if they made actual sense. Whether you agree with their platform is beside the point. The students have clearly articulated they are standing up because of all the gun violence and they believe gov should take steps to curtail guns getting into the hands of loons or those who otherwise want to shoot up the place. Again, not arguing for any side here. Just saying that this meme is plain stupid.

Students are standing up because they are scared.

Dave T: totally true. Weak minded people who don't have a direction being preyed upon at a time when they are most vulnerable. A page from the filthy playbook of none other than ultimate scum bag himself, Rom "the total clown" Emmanuel "never let a good crisis go to waste." Spoken from a class A manipulator if their ever was one, while he poses as a so called "public servant." What a disgrace

Students are standing up because STUDENTS were shot.

Look at those who made all these gun free zones, look to who changed healthcare for those that need mental help. Look at those who keep releasing violent criminals back into our communities. Look to those that claim disarming and infringing on law abiding americans will make the criminals stop. Liberal communist progressives!!! And they are glad to sacrifice many lives to destroy the 2A.

Conservative logic states that you must do this, this and that in order for your word to be valid. Despite having a co standby lying commanderp in chief

Hate to break it to you mate but Trump changed healthcare. How do you expect someone with mental issues who can't hold down a job to be able to afford private insurance?

I volunteer my life so these kids can protest what they want. This is America of you want a dictatorship where you can't protest go to Russia

Can anyone tell me exactly what was accomplished by this walkout? What was gained from it?

Maybe if the students stopped bullying kids who are not in the click or look different or cant afford all the name brand clothing kids would not snap at school. Students were killed by students. This gun control rhetoric is crazy. California has the highest incident of school shooting yet they have some of the strictest gun laws in America. Politics has no place in murder. They need to protest Doctors putting these kids on meds that shut down normal thinking. They are without remorse under the influence of antidepressants and mood altering meds. Throw a pill at it. Well that does not fix the problem. Making it a political issue because Hillabeast did not get elected will not fix it. Go back to class and actually care about one another. Report suspicious behavior. Quit being sheep.

Your clown arguments are obtuse and mute... If you want facts here are some facts for your ass, Look on the FBI website and see what kills more people each year and it isn't guns or gun violence!!!! Oh but you don't want facts becasue it doesn't go with your agenda does it????? Exactly!!!!!

Good job do you feed your kids tide pods with there kool-aid.

The kids walked out because it was a free pass to get out of class and nothing more. Even if you find one or two snowflakes 99.9% could care less about your liberal agenda.

12:32 watch the video Joe just posted about US arms sales to Syria and tell me again how much the government or media care about gun violence.

A gun free zone is you worst enemy.

They are also being used by the Libtards running the school system and the Boards of Education.

This time it was STUDENTS shot by one of their own (again). Some of them saw the shooting in FL as their issue. The students will look back on their "protest" someday and realize they were politicized with no more than a promise that they would not be punished for hooking school for an afternoon. They have no idea, at their ages, how easily they can be manipulated for political purposes.

Being mislead by anti Trump haters.

That's what it was supposed to be but it turned into a gun issue.

First, a shooter would not seek mental health care if it we're free. Second. These kids are being used.
Protest about your mascots name or something. Allow time to drive. Don't let politics use you as their puppet.

Half of you stil believe Obama is not an American citizen and saddam had a standing nuke program and orchestrated 9/11. Want to find a puppet? Look in the mirror.