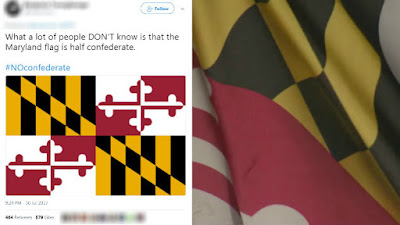 BALTIMORE (WJZ) — During a social media campaign to derail HBO’s planned modern-day Southern slavery drama, one Twitter user’s posts about the history of the Maryland flag got a lot of attention.

“What a lot of people don’t know is that the Maryland flag is half confederate,” @benjancewicz wrote, using the hashtag #NoConfederate.

Yes, even though Maryland was a Union state, the flag — which is featured on the state’s license plate and is a popular adornment for clothing and accessories — does contain some Confederate symbolism.

The flag’s older history is tied to George Calvert, an English politician and colonizer who more or less founded the Maryland colony, although he died just weeks before the charter for the state was approved in 1632. The settlement of the area was left to his firstborn son Cecil and his second son Leonard Calvert was the first colonial governor of the province.


And now the question of the hour-- who cares?

What difference does it make?

This is just splitting hairs looking for something to be offended about.

GROW UP. Get a real life.

This is getting really old now.

How is it that two family coat of arms which were around before the southern confederacy was formed, long before, tied in any way to slavery? If one is going to associate the Maryland flag with slavery then all Southern state flags which were and are still in use from the civil war should be removed due to their slavery connections!

I'm calling bullsh*t on this. Coats of arms were used in the design. Give it a rest on the slavery, the south, the unfairness, I want my mommy and vanilla wafers and orange juice. Does anybody know Kumbaya?

Nope! Got to get rid of it now!! It's ugly both in visage and in history!!! Take it down right now!!!! It must go!!! Now, where are my new license plate, drivers license, and crab sticker?

I'm guessing that entire cities pre-Victorian neighborhoods and buildings should be razed, especially in the South, as there is a history that may involve slavery. Truly, all those southern states should be clear cut and the land sterilized, especially if it was farmland! Finally, everyone whose heritage can be traced to relatives living in those states prior to 1865 should be jailed. Come on, does any of this sound realistic?

Seriously, this needs to stop. No one living today has any true connection to anything that happened during or before the Civil War. No matter how vile or criminal you may think it was, it is the history of the US. It can not be changed, and should not be forgotten!

What's next,move every grave off of Arlington cemetery since it's on the site of the Lee family estate.


These coats of arms originated in Merry Olde England. Must mean we have renounced the Constitution and are subjects of the Queen.

The micro disavowal of all aspects of our history that displease a SJW of some sort is foolish.

We fought a Civil War and hundreds of thousands lost their lives on the battlefields. They were fighting for principles they believed in whether they wore blue or gray. The war was started over States Rights, including slavery. Slavery across time has no defense but has been a common practice for eons, practiced just about everywhere.

We're called The United States of America; a voluntary group of states banded together for our mutual benefit. Not The Federal Government of America. Leave historical sites and artifacts alone; learn from them; don't try to impose our current views on what occurred. Use the past to form the future.

DE vanity tags cost $40 as a one-time fee. MD charges more YEARLY and, if the tag is rendered "non-compliant" customers pay even more to replace them. This is somewhat similar to what Mayor Day is pulling off: Make something illegal so that people must pay to replace.

Maryland was classified as a southern state. Maryland land mass was majority below the Mason / Dixon line. So who wrote history? Somebody needs to research this BS and get it right. Maryland ws never known as a northern state.