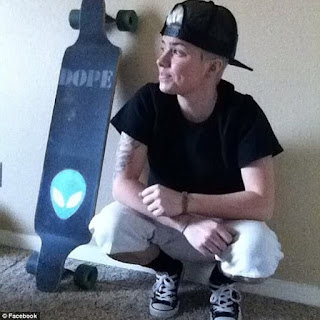 The body of a Texas woman was found inside a hole on a beach shortly after going missing during a family vacation.

Ashley O'Connor an artist from Plano, Texas, was on holiday in Maryland with her family when she became separated at around 2am on Monday morning.

The 30-year-old's body was discovered around 6:30am, and was removed after the scene was combed at 4:15pm Monday, in the busy resort town of Ocean City.

A representative for the Office of the Chief Medical Examiner, who is conducting O'Connor's autopsy to determine cause of death, tells DailyMail.com: 'We can't discuss cases that are under investigation. There is no timetable or deadline for any of our investigations.'

I know what's coming - so here's a pre-emptive strike on conspiracy theorists that are sure to come out of the woodwork:
Whatever happened, it will be reported honestly by the OCPD and the Town.
Why?
Because in this day and age anybody and everybody can film or record everything.
Did a Beach tractor drive over the hole she was (for some reason) laying in?
I'm pretty sure that would be an obvious clue to be able to see if that was the case.
If it was, the Town will report it - along with the army of city and state employees that were at the scene early-on.
So please, no "the city will cover it up to avoid bad publicity" theories.
That's just stupid.

No theory here. Just sadness for the family. May she RIP.

6:24 Where have you been the last two days?
That ship has sailed!

6:24 No, it's not stupid. In Ocean City specifically, and certainly SBY too, the people at the top care only about being in power, not the plight of anyone or anything else unless it's a political windfall. Meehan has lied to us on numerous occasions. To him and others, lying is not wrong, it's political spin which is acceptable. Just ask him about the boardwalk/downtown thugs and their crimes, then go see for yourself and read the reports. Note the extreme contrast.

If not for conspiracy theorists and others who refuse to blindly accept authority without question, we would have never learned that Oswald did not act alone and we would not be on the verge of learning who killed Seth Rich. Sure, there are a few nuts out there who will connect anything to anyone, but the main reason most of us come to this site is to learn what the politicians won't tell us and the police are told to leave out.

Holes are prohibited on the beach in OC. Amazing no shovel was found, and she was "buried" under 4 foot of sand. Yet the medical examiner determined that died as a result of sand suffocation (buried alive), and amazingly ruled it to be accidental. I hope the victim's wife (that's right, wife)has an alibi for when her mate was missing. But then again, OC doesn't want any publicity if it was murder, so they are in the process of killing the investigation.

I'm guessing someone thought she was Justin Bieber

Another story / version comes out. I still say homicide. The tractors sifted the sand for trash and never seen the hole or body, questionable? She was discovered because her hand was up out of the sand. She was buried in a 3-4 ft hole and no one discovered or seen someone digging. She was found 2 1/2 hours after the tractors went through. This was a murder / homicide. A lot of facts that point to an OC cover-up. Tourist beware.

Not buying that tractor ordeal thing, there is way more to this story... sorry ocean city you gotta come up with something better than that