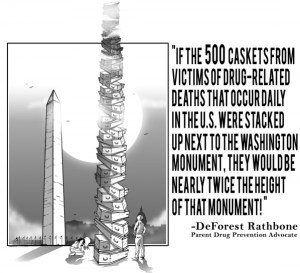 More than 16 news articles from 8/16/16 through 10/23/16 reveal a virtual feeding frenzy among Maryland state legislators, marijuana bureaucrats and would-be pot contractors. They all cited serious squabbling over access to profits from the federally-illegal addictive dangerous child brain poison, marijuana being falsely promoted as “medicine” under drug-trafficker-friendly Maryland State laws.

But two recent official federal government reports categorically confirm from numerous scientific studies that smoked marijuana is not medicine but instead is a dangerous Schedule 1 drug that endangers the health and safety of users, especially youths. And is a major gateway drug leading to addiction to other deadly drugs.

Yes, marijuana is a gateway drug because you have to go to the heroin and coke store to buy it. When the store is out of pot, people spend on what's in stock. This is all because we are not allowed to grow it in our own back yards where there is no heroin or coke.

Yes, marijuana deaths are high, as the illegality of it makes it a hard to get and high dollar product that criminals are willing to kill over the tens of thousands of dollars generated in its sales.This is all because we are not allowed to grow it in our own back yards where it would cost nothing to grow and all the neighbors who like it have their own, taking the money factor out of the product.

Yes, Marijuana should not be smoked by minors, and all good parents know that. That's why we parent our children and guide them along.

A little common sense could go a long way in this world, but the State wants a "cut" of the cash, so that's not going to happen.

Well according to Sessions marijuana is just as harmful as heroin...

Are they ignoring the same junk science that brought us global warming? Cancer only caused by smoking cigarettes?

Fake news, I am 35 years old and I have never in my 35 years on this earth, have seen or heard of anyone dying becasue of weed, except when a cop shoots you and kills you for a different crime like pulling you over for the smeel of weed, and saying you had something in your hands, or when you run away from a cop pulling you over with the suspicion of weed... I haven't seen or heard of anyone getting cancer from it either or ever hearing or seeing someone OD on weed either...

Now, I will admit, the other ways you can be harmed or killed by weed is by the way you smoke it, I.E. if you put it in a cigar or cigarette or use rolling papers... Using a glass bowl or pipe doesn't not have carcinogens in it... And for those who will argue weed has Carthaginians, maybe it does, but not anymore that you normally breathing Carthaginians in the air everyday, and your not dead from breathing air yet are you??? Of course not!!!

There is so many benefits form weed, and the plant itself, that is why it is illegal... Ask yourself, why id coffee, or alcohol or cigarettes legal, yet they kill people every day... Because the govt can tax it, and the govt can make you pay dearly for weed being illegal... Again, all about money, nothing else, nothing more, nothing less...

11:53 junk science? I think your comment tells us all we'll ever need to know about your intelligence

Holy crap. Does anyone really think weed is harmful???? You need to get out from under the rock. It's natural and not harmful at all. The only thing harmful about it is being caught with it

Lol, this article is such a stretch. So we are going to act like alcohol and tobacco aren't a million times more harmful yet have no issue with either being "legal to consume?" Makes sense.

Why can you not regulate it like you do with alcohol or tobacco and enforce an age limit? Pushing it as a child brain poison, hahahaha.

12:21 Just because something is "natural" doesn't automatically make it harmless. That's idiotic. The human lungs were not meant to have anything other then air in it's purest form in them. It's ludicrous (and asinine) to even assume that inhaling and holding in the smoke isn't damaging to the lungs. And the heart because the heart race increases sometimes 100 fold and people have died from heart attacks after smoking pot whether the pro pot people want to believe this or not. I suspect not because most are in complete denial about the dangers and will lie about the dangers until the day they drop dead.

In this day I am shocked that people still believe this garbage. Just shocked. You may have a moral objection to people consuming weed but thats your business, stay out of mine. Beyond your moral objection there is zero, ZERO data that shows that pot is harmful in anyway. Never killed anyone, never caused and illness, nothing.

I have had this conversation to many times and if you still believe the propaganda your government tells you regarding pot that's your deficiency not mine.

12:50--
Nope! He died of skin cancer that started on his toe & wasn't diagnosed in time. Stop spreading more ridiculous lies. Pot being a gateway drug is a whopper, too. It isn't in the drug companies' interest to have this medicine legalized; follow the $.

And the heart because the heart race increases sometimes 100 fold and people have died from heart attacks after smoking pot whether the pro pot people want to believe this or not. I suspect not because most are in complete denial about the dangers and will lie about the dangers until the day they drop dead.

well gee willikers, smoking cigs makes you heart beat faster too, and um, let's see, causes cancer and all sorts of other vile things yet...imagine that.

I dare ANYONE to produce any proven medical case where pot caused a single death.

Pot has been around and in use since millenia. They have found it in tombs from biblical times and beyond. I have even read where pot oil was used in the 'anointing' of some pretty popular guys from back then.

We're talking thousands of years ago. Oh wait, maybe that's what happened to the Mayan's. They all got stoned and killed each other, or elevated their use to opium like that asians, or all had heart attacks, or ......horse hockey.

But our gov't decided to get TWO patents for medical pot for....what reason?

Come on people, do a little reading from someone/thing other than the ones who BANNED it. There is a dollar sign behind everything, and I mean everything this gov't does.

Or you can keep believing what you have been brainwashed, no skin off my nose.

And I bet you still believe obammy isn't a muslim and all those muslim brotherhood people in his admin was just a coincidence........

maybe you have been smoking it after all.

My doctor says that he'd prescribe it to many of his patients, and that lots of other local docs agree.

You can vaporize it or use edibles and not put any smoke into your lungs. This is an extremely stupid article

I don't believe marijuana is good for you. Who ever does is an idiot.

1:07 pot makes your heart beat faster?? Really? Have you ever smoked it before ??

Anonymous Anonymous said...
I don't believe marijuana is good for you. Who ever does is an idiot.

I don't believe marijuana is bad for you. Whoever does is an idiot.

See how that works?

Anonymous Anonymous said...
1:07 pot makes your heart beat faster?? Really? Have you ever smoked it before ??

Actually 107 is correct. I didn't think it did either until I looked it up and said something I would regret.

I recently read a couple of new articles about pot smokers. One said a person who smokes pot raises their risk of stroke by 25%. The other said that pot smokers raise their risk of heart disease by ___% Don't remember the percentage. Probably because I have been smoking pot for 43 years. Now I'm not saying that I can't have a stoke or heart disease, but at my age and with the genetically modified food I get, and the polluted air from the chem trials, who can really say that the pot caused the stroke or the heart attack that I may get. Come on people, don't fall for the first thing that you see or read these days. Most of it isn't true.

I'm trying to quit before it kills me....

Set the record straight for all you people who fall for ANYTHING and everything your "leaders" tell you.
NEVER (read that again) in the history of mankind (no matter what some 75 year old southern redneck says, or what any cop might tell you), has ANYONE -- not ONE person -- EVER died from marijuana use.
Unless, as a prior poster pointed out, he gets shot by a trigger happy cop, or 300lbs of it fall off a truck and kill him.
Pot somkers don't rob banks, attack you in gangs, break into your house, or go to bars looking for fights.
Lots of alcoholics do, though. Their drug of choice kills ......wait for it....HUNDREDS OF THOUSANDS very year. Their drug of choice is ADVERTISED with the permission of your "leaders".
Stop thinking your leaders have anything in mind other than their own enrichment and furthering the power they hold. MONEY.
They really couldn't care less if your whole family was killed tonight. They would, however, be right there to make sure they maximized their cut of whatever you left behind.
Keep cheering. And start thinking some original thoughts.