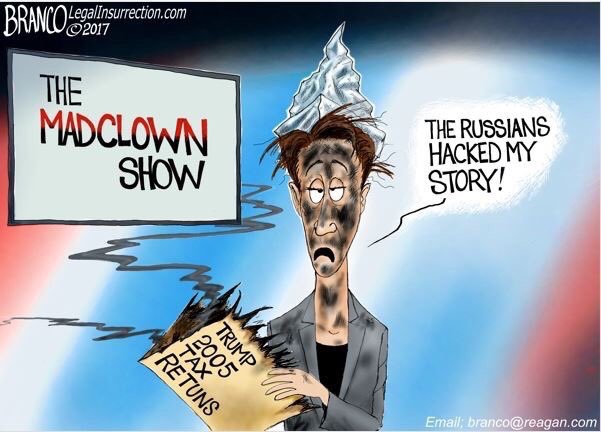 TC: After Rachel Maddow's big flop, she now claims it's her viewers that blew what she had out of proportion. Well, that's not exactly true as she fanned the flames with her misleading taunts about obtaining President Trump's 2005 Tax Return - which turned out to be a mere 2-pages out of literally thousands.

What were the results? Trump is rich and he paid 25% taxes when his naysayers all paid well under. If anything, Maddow proved her own biased 'reporting,' letting everyone know she's just an opinion person with no real substance or hard-hitting information.

Eggs lobbed at the entire opposition were epic and filled with rancid yolk. The stench is still smelling pretty bad three days later.  Her viewership on Tuesday was 4M but dropped the next night to 88K; the numbers haven't changed for the better either. Her show continues to tank.

This morning, Maddow got a little surprise:

Good news, maybe she can get employment with the dixie chicken crap losers.

It couldn't have happened to a more deserving person.

Hey, kids, here's an outstanding example of how you, too,
can have a great job after earning just a Bachelor's degree!

Opportunities like this one are out there, so go get 'em!

now she is blaming her viewers for what she said. can you get any lower? (map)

What's wrong with that guy?

The best response I can think of is LMAO

That dude has a mental illness and should be treated as such.

Anybody ever watch the blinking patterns of Maddow as she does her thing on the air? The bigger the lie, the more blinking. For all anyone knows, she may be blinking out a code while she talks that only her insiders can understand.

You have obviously been out of touch for many years. It's Linoleum Licker these days!

Anonymous said...
Anybody ever watch the blinking patterns of Maddow as she does her thing on the air? The bigger the lie, the more blinking. For all anyone knows, she may be blinking out a code while she talks that only her insiders can understand.

Why are you watching her?