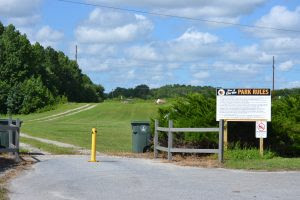 BERLIN – Citizens in support of renaming Berlin Falls Park in honor of a popular mailman are expected to bring the issue to the town council next week.

Last month, Berlin resident Bill Todd launched an informal petition effort to rename the park after recently retired Berlin mailman James Tingle. Now that petitions have been posted in downtown businesses for several weeks, Todd says he’s ready to share the signatures with town leaders and see if the effort can move forward.

Todd came up with the concept of renaming the town’s newest public space James Tingle Park as he was looking for a way to honor the mailman for the 30 years he spent walking the streets of Berlin delivering mail. The overwhelming positive response he received when he brought up the idea on a radio show prompted him to go forward with it. He says nearly all of the downtown businesses provided space for the petitions.

Berlin Mayor Gee Williams, however, said when contacted by The Dispatch last month that it would be “folly” to name the park after Tingle, who he said he admires, when there were numerous citizens in Berlin who contributed to the community. He said he expected naming opportunities to arise over time and pointed out those opportunities were usually tied to financial donations.

“So, if anyone has a six-figure financial gift ready to give the town for the purpose of a naming opportunity to honor James Tingle, or any number of other honorable current or past citizens of Berlin, then by all means contact me, because then and only then, will we have something to talk about,” Williams said.

Gee should be voted out of office.


Don't know the mailman. Glad he is viewed positively by those he served.

Generally, this, that or the other public building, bridge, etc. are named for someone who is deceased.

What does the guy with the idea plan to name in honor of the next retiring postal clerk or mailman?

What about the backlog of retired teachers with 30 or more years of service who have been hoping to have something tangible named after them?

How long has Boardwalk Elvis been entertaining us? Where is the petition to put his name on something?

How about Runaway Bride Park? They can build a wedding pavilion or gazebo and become a wedding destination!

THE MAYOR WOULDNT BE HAPPY UNLESS THEY BUILT A BAR AND NAMED IT WILLIAMS TAVERN,LIKE THE ONE HE GREW UP IN.HE IS NOTHING BUT A DRUNK.POS. PUT HIM AND LISA HALL ON THE SAME PAGE. HE IS ONLY CONCERNED WITH ENCOURAGING PEOPLE TO GET DRUNK AT ALL TOWN EVENTS.DID YOU HEAR ABOUT ALL THE FIGHTS THAT BROKE OUT ON NEW YEARS EVE IN DOWNTOWN?BLAME THE MAYOR FOR ALL THE OPEN CONTAINERS AND DRUNKS. NOT TAKING MY FAMILY THERE ANYMORE.

8:31 Clearly you don't know James the mailman!!! What an awesome tribute to a normal, down to earth person!

Sorry that you don't understand how a person that delivered the mail for 30 years becomes a fixture in the community. Many people have today have no idea who delivers their mail and don't even care. Let the community decide and screw the mayor that has his hand out for a donation.

The Mayor is correct ~ Naming issues are fraught with problems! With Every generation and often every decade, comes deserving heroes & there just aren't enough parks and public buildings to name. Yes, I am sure this 30 year mailman is truly wonderful and deserving. No question about that, and I admire the individual who brought up the possibility but where is the line drawn when it comes to naming parks, buildings, bridges, roads, trees, sidewalks, public toilets, etc. There are ALWAYS winners and losers in a naming battle, especially these days in our politically sensitive world.

If the Mayor and council open this can of worms they are asking for trouble!

10:45 Apparently mare Gee draws the line at donating $100k. "So, if anyone has a six-figure financial gift ready to give the town for the purpose of a naming opportunity to honor James Tingle," I sure hope the people of Berlin vote him out of office and name the transfer station after him.