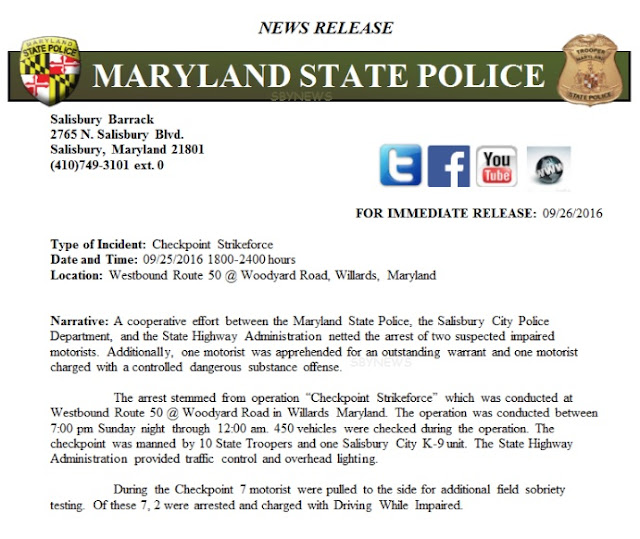 2 people were arrested out of 450 inconvenienced motorists.
The 2 who were arrested failed the test, but there is no indication that they would have caused an accident.

Nobody was injured. No property was damaged.


Doesn't this mean they can STOP doing these illegal searches?

2 arrested in 5 hours with multiple officers required. Can everyone say inefficient!

People who don't think the Constitution really exists or don't think the Constitution APPLIES to them will only stop after we (we, the people) stop their breathing by suspending them 5-6 feet in the air, by their neck.
FOUR HUNDRED AND FIFTY INNOCENT (!!) people were stopped by armed agents of the government, searched and questioned without cause or warrant. To see IF, MAYBE, POSSIBLY, SOMEHOW, they were committing a crime. A fishing expedition for crime. They could have caught 5 times that many criminals by standing on the corner of Isabella & Church St during the same period.
No money in busting crackheads on disability, though. And it's a LOT more scary, too. They might shoot.
Stick with the Gestapo operations.
And lastly. please stop with the military nomenclature. "Operation StrikeForce!!" Does it boost the self-esteem of people who are only 5'6" and wish they were 6'5"?
If you people don't stop cheering this Nazi crap, they will be showing up at your house soon to do a surprise "inspection", which, if you fail, means you won't be eating dinner at home that night.
You know, to get those nasty guns off the street, some rights just have to be sacrificed. And since you don't say anything now, don't say anything THEN, either.
keep cheering.

Hell no they can't stop them! It's their excuse to not fight real crime. It's easy overtime for them. 5 hours and 2 arrests.... for 11 cops and a k9...how many crimes were committed during that span in salisbury? Maybe saturating a problem area with those cops could have resulted in real crime being stopped or prevented. This illegal crap needs to stop and cops need to focus on real crime not these gestapo checkpoints.

By law, you can turn around or avoid a check point. They have to give you so much notice and the opportunity to do that.

I did that once, and they have this "catch" car that then follows you and pulls you over making up some bogus BS to stop you. Which and in itself is illegal, but they do it.

We pulled into an apartment complex, parked, and walked into the building as if we lived there. He left, we laughed ... waited 5 minutes and continued on our way home.

Score one of the underdog!

Im Clain is correct.
This Statutory Law enforcement is the biggest problem facing American citizens. The US Constitution does NOT allow for Statutory Law. The Founders rebelled against Statutes.

We must insist on Common Law.

Police need to do some reading.

Looks as if Mike Lewis has fallen out of favor with the MSP,having the Salisbury police dept. out in the county is unusual to say the least.

How can any arrest other than DUI be made at this already unconstitutional checkpoint? No identification is to be asked for,only for officers to observe for signs of impairment! This is prof that these are nothing more than Gestapo style checks in which papers must be shown! Wake up you idiotic people! Any good lawyer will get all charges dropped for any arrests stemming from these ! Explain that to a family who has had a murdered loved one and the assailant was caught in this manner! We made an illegal arrest on the guy who robbed ,raped and murdered your kid so I'm sorry to say we had to drop the charges!

kops cant go into the ghetto. that would make news. easier to harass working "white people" everyone knows they got jobs and money!

2 people will have to spend $5k each to a lawyer so they can continue to drive to work and feed their families less food for a while.

No one injured, no property damage, just damaged lives and 450 other lives hassled by government thugs.