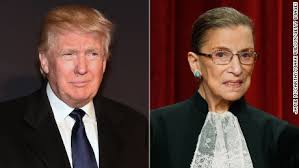 "On reflection, my recent remarks in response to press inquiries were ill-advised and I regret making them," Ginsburg said in a statement. "Judges should avoid commenting on a candidate for public office. In the future I will be more circumspect."
Ginsburg extensively criticized Trump as "a faker" in an interview with CNN earlier this week.

Her comments enraged Trump and leading congressional Republicans and thrust the 83-year-old justice into the middle of the heated presidential race.
More
at 7/17/2016 08:00:00 AM

It's too bad that she can't turn back time and not say what she did. It't another bell that can't be unrung.

I have to agree. All of us can after-the-fact apologize for anything, whether we mean it or not. However, just as in Hillary's case, if what you did was wrong, you should have to pay up for it. In this case, Justice Ginsburg should resign. This comment may have been "ill-advised" but she made a huge error in judgement. This HAS to reflect on her position on SCOTUS and she should resign immediately.

She is clearly losing her mind. I love my father the age of 83 but his mind is not what it use to be anymore. No one should be serving on the Supreme Court at 80 years old in my opinion.

At least she has the decency to apologize. Trump hasn't made 1 apology for any of the idiotic things he has said.

Your opinion is valid 11:31. Not only is your mind not as sharp at that age, but neither are your senses. My mentor and dear friend was the longest sitting judge in another state where they isn't a mandatory retirement age for judges. He retired just over 80 yrs of age because he was having trouble hearing. Even with a hearing aid he did not feel comfortable so he retired.

Beware of the lawyer speak going on 11:28. She did not apologize. She said she regrets saying what she did. Saying you regret something happened isn't the same as saying I am sorry. You see it with companies all the time when they find themselves in hot water. They offer public statements of regret so the public believes they are contrite and humble but they stop short of apologizing which is an admission of fault. Ginsburg did just that.

Well put 12:02PM
I'm just wondering if she is regretful enough to step down now?

She wants to retire and needs a dumbocrat in office in order to retire. She is just looking out for her own interest like most dumbocrat office holders.

If she really regrets what she did (vs regretting that it was exposed), she will make it right and personally APOLOGIZE to Donald Trump.

Anything less is just talk.

She regrets nothing, she meant to say what she said, and now that there's backlash, she's sorry. BS, just total BS. Step down and get out of Washington, DC and the United States as far as that goes and go on over to New Zealand.

1:27PM
She's got nothing the Kiwi's want. It's tougher to get into NZ than anyone thinks. You've got to have something they want., and this POS ain't got it.

It's okay mom mom. You had no intent, you didn't intend on saying it, it just came out. After all you are only a mere Supreme Coat Justice sweetie. Us minions understand, go ahead.


She really doesn't regret any of her comments. She only regrets
the there was such an adverse reaction to her comments. She is
entitled to her opinion, but because of her position, she should
keep it to herself.

I liked how cbs spun this story. Their headline stated that she apologized. I guess enough people complained that they have now changed it.

That thing should apply for VP on the Clint ticket.

Her walk back was completely disingenuous and it's sadly marred the highest court in our country. Why she thought for a split second, much less three of them, is something many have taken to heart. Surprising the liberals have been trying to get her to step down for all of Obama's tenure. This gave them the credence to continue to apply pressure to her to retire.

While I understand the justices are humans holding their own political ideas and personal experiences, they are supposed to be (and act) in an apolitical fashion. When Ginsburg came out so adamantly against a presidential candidate, she not only became political, she also became questionable as to whether or not she can real execute her job properly within the scope of the Constitution. Legislating from the bench is not better than legislating behavior and morality. It's wrong. Ginsburg made it all the more apparent, we have no apolitical agency in our government. Pretty much, the only body that follows through with partisan-free service to us is the US Postal Service.

Liberals have limited self control.