IRS Admits To Illegally Seizing Bank Accounts; Agrees To Give The Money Back 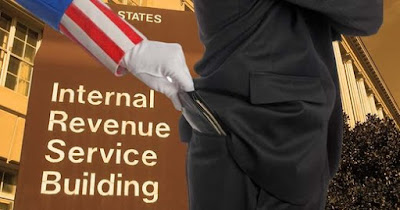 It's the stuff of libertarian dreams. The IRS admits that it wrongfully took money from innocent citizens, and it gives the money back.

This is actually happening to victims of a little-known form of civil asset forfeiture carried out by the IRS on the premise of "structuring" violations. In case you didn't know, depositing or withdrawing just under $10,000 from your bank account multiple times is viewed as suspicious and possibly criminal activity.

In a victory for lawmakers working to make it harder for the government to take property from innocent Americans, the Internal Revenue Service plans to give people who have had money seized over the last six years the chance to petition to get their money back, The Daily Signal has learned.

According to a GOP source, the IRS told the House Ways and Means Oversight Subcommittee that it will send letters to everyone the agency seized money from for alleged structuring violations, which involves making consistent cash transactions of just under $10,000 to avoid reporting requirements, starting in October 2009.

One petition has already been granted, and others are likely to follow.

The IRS has seized entire bank accounts with no notice or due process, alleging the owners sought to avoid federal bank reporting requirements. The aforementioned pattern of banking is described as "intentionally structuring cash transactions," and they call it a crime.

This nefarious provision of the Bank Secrecy Act is purportedly targeted at drug traffickers, money launderers and terrorists, but it has swept up hundreds of innocent people—including small business owners who lost everything because they deal wholly or partly in cash.

Carole Hinders, owner of a Mexican restaurant in Iowa that only accepted cash, had her entire bank account of $33,000 seized even though she did nothing wrong. The IRS seized $63,000 from Randy Sowers, a dairy farmer in Maryland, because he was depositing under $10,000 into his bank account.

Ken Quran, the owner of a convenience store in North Carolina, had his entire bank account of $150,000 seized after working nonstop for years to build it up. His crime? Withdrawing cash from his bank account in amounts under $10,000.

And now the same government wants to be in charge of whether or not you can have a gun!!

Here's a good Christian farmer (I know the family personally) who the IRS did wrong-plain and simple.
I go to church with the man, his family has been farming in Preston, MD for generations.
http://dailysignal.com/2016/05/25/maryland-farmer-who-had-41k-seized-by-irs-continues-to-fight-for-money/

Maybe the IRS ought to look into 1000 UNREPORTED foreign "donations" that the Clintons took. (That ain't a mistake, people. Thats a pattern.).
Thats not happening.
Two sets of laws.
BILLIONS of dollars are passed around in the highest echelons of banking and finance. WHO do you think is laundering a trillion dollars a year in drug money?
BUT, let "we, the people" move eight or nine thousand dollars a few times and there is an ARMY of people waiting to seize everything you've worked for....
AND the best part for all you lemming brainless cheerleaders?
There isn't even a charge or a trial.
Now, they are kind enough to send a letter telling "we, the people" that if they ASK NICELY and provide proof (of INNOCENCE????), they MIGHT, possibly, maybe-baby, LET you have YOUR money back. Such benevolence from the Masters!!!!
However, if in your letter, you reference anything to do with due process, abuse of power, assumed guilt, dictators, Nazism, corruption, theft, robbery, slander, or hanging bureaucrats, well, your request will be uh, um, ....lost. They'll get back to you later. MUCH later.
I also wonder, since they charge US, will they PAY interest on the money they stole? How about returning the reputations and lost businesses?
Keep cheering.

the employees and 'higher ups' (Obama) should be in prison for what they did to law abiding American citizens. wonder if President Trump could hold them accountable in some way...

Maybe they should look at the 1000s of illegals filing multiple false returns. Nope they are to busy screwing hard working Americans over. Shut em down. Trump needs to dissolve the who corrupt unit.