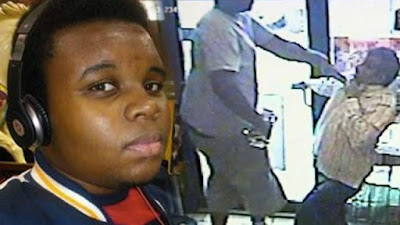 The death of Michael Brown at the hands of police officer Darren Wilson sparked a racially charged controversy that we haven’t seen in at least a decade.

We all know the story by now. Mike Brown, an African-American teen, robbed a convenience store and then ran into Officer Wilson on the street. Brown then resisted Wilson’s orders, grabbed his gun, and was eventually shot and killed by the officer while charging at him full speed preparing to tackle him.

The media immediately dumped gasoline on the fire and people like Al Sharpton instigated and encouraged race riots and lawlessness that devastated the surrounding community and the country.

Pitting people against each other is of course what the left does best.

And who would have thought this would happen? When you continually chastise people who are there to serve and protect, eventually, they're just going to turn a blind eye to crime and move on. Saw a segment on O'Reilly where they were complaining about some black man being gunned down in the Chicago street. Whatever. You guys asked for it when you unjustly accuse police of wrongdoing and throw your little BLM temper tantrums in the streets, rioting, before any facts are ascertained by authorities as to what happened in any given situation.

Just like the doctors who by oath are supposed to speak up in emergencies but don't because, in the past, they've been sued by the victim's family for not being able to save the person's life.

There are cases of police brutality, like the case litigated by Luke Rommel last year; however, they are not as norm as the black community would have you believe.

You can't have both ways. When is the public going to embrace this trade off and rioting, rebel razing and teaching kids to hate do have their consequences?

Let those who don't want the police in their neighborhood learn to police themselves. Don't call 911.

1258 exactly. Furthermore, this is what happens when you cross that blue line one too many times. I don't have any sympathy for them. None. They get what they deserve.


Thank you law enforcers.
Use all force needed and add some.
If the trash doesn't resist, the trash will go home safe too.

AS a cop I too would back off on enforcement; hell, the Baltimore Mayor even said, "Give then room to destroy". If top government officials don't give a damn about law, then why should I risk my life, or a lawsuit.

I collect my check and go home. career survival mode.

230. Eight and skate I'm not getting indicted for politics. 1041 gun belt, blinders and ear plugs. I hear and see nothing

2:30 I do now too. It is no longer a career to be proud of, it is a lawsuit waiting to happen.
My partner, and myself have flat tires, steering trouble, get lost, garbled radio transmission, all when the call is in a predominately AA neighborhood.

Like a lot of us are saying "Better Late, than never".

This must be what is going on here in Slumsbury, the cops are laying low, doing nothing!

Always Late and do not care no more said...

10:46...why get involved when the Obama Media attack you for doing a job?

I delivery to local high schools and I see teachers allowing not just disrespectful behavior happen but criminal behavior. I asked one about this and she said the principal;s hands are tied. The board of education and the board do not want to look bad.