Would YOU Seriously Wait In These TSA Airport Lines? 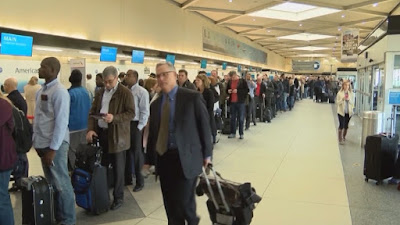 One of the big topics going around this week are the incredibly long lines at Airports across America.

I believe the TSA is a government agency , if so , need I say more , it's as screwed up as any other agency Obama has put his thoughts
into. The legacy of the worst president in the history of America.
No I would not stand in the lines , they still have trains , buses and automobiles.

Get rid of the TSA. They prevent nothing but efficiency and ease of travel.

You call that a line? That's not a line. Join the Army if you want to see a line. A good one forms every few minutes.

8:05, OK, you are right. However, it's being reported that all of the major airports around the country have a 2 hour line.

If you're leaving from Baltimore, (BWI) and heading to NYC, you plan on leaving for the airport 3 hours in advance from let's say Annapolis. By the time you board, fly there and take transportation to your destination it would be just as quick, (if not quicker) to drive.

Just as important, I think our readers should know well in advance what to plan for these days.

They should use common sense and not step search babies and 90 to women. Then they should profile all Muslims. Just good common sense. Thank Obama for all this bs.

They are just conditioning the public. Preparing them for future bread lines, etc.

There are people who think about security issues for a living and come up with solutions to things just like this. It's evident from this that the federal government hasn't hired any of them.

The easiest thing to do to keep airlines safe, and cut down the lines, is allow free checked baggage again. There also needs to be a hard line on the sizes of allowed carry ons. The lines are due to everyone trying to save $25-50 a bag.

Once Trump's in, we will get this sorted out.
I think we should just hire the Israelis to handle it.
They haven't had a hijacking in decades.
Guess why.

Stop all carry ons that are not purses, briefcase, computer bags, or camera cases. No rolling suitcase, and other luggage. This is what holds up the lines.

When I was flying to several cities for work over a week, I passed right thru TSA at many an airport because I had no carry on luggage. The TSA agents whisked a lot of us right thru, with just the body scan. It is the scanning of the carry on stuff, that is taking all of the time.