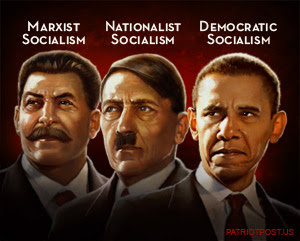 Paraphrasing the esteemed classical liberal economist, Friedrich von Hayek, Future Freedom Foundation President Jacob Hornberger wrote, “There is no difference in principle, between the economic philosophy of Nazism, socialism, communism, and fascism and that of the American welfare state and regulated economy.”

Not only is there little distinction between Soviet and German socialist systems of the 20th century, but there is no consequential distinction between Marxist Socialism, Nationalist Socialism, or the most recent incarnation of this beast, Democratic Socialism. The objective of socialism by any name, is to replace Rule of Law with the rule of men, and the terminus of this transformation is tyranny.

The once-noble American Democrat Party is no more.

Vladimir Lenin wrote of the application of Marxism in Russia, “Marx said that the revolutionary dictatorship of the proletariat lies between capitalism and communism [Read: "socialism”]. He noted, “Political institutions are a superstructure resting on an economic foundation,” and that foundation must be destroyed in order to bring down those institutions.

Following the Marxis-Leninist models, in Adolf Hitler’s 1925 autobiography “Mein Kampf,” he wrote of his Nationalsozialistische Deutsche Arbeiterpartei (National Socialist German Workers' Party or NAZI), “The party should not become a constable of public opinion, but must dominate it. It must not become a servant of the masses, but their master.” On the the socialist state versus individual Liberty, he wrote, “The unity of a nation’s spirit and will are worth far more than the freedom of the spirit and will of an individual; and that the higher interests involved in the life of the whole must here set the limits and lay down the duties of the interests of the individual.”

For a socialist, Obama has made a heckova NeoCon.

P.S.: I AM AMAZED BY HOW IGNORANT THE GENERAL U.S. POPULATION IS ABOUT THIS !!!