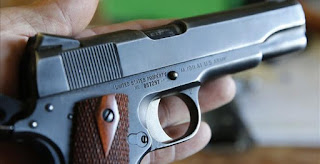 Under a new law effective New Year’s Day, California cops can now seize guns from law-abiding Americans without charges and without giving any notice.

And police can keep those firearms for 21 days under the law known as AB 1014.

If family members believe a gun-owning individual is a danger to themselves or someone else, police may acquire a temporary “gun violence” restraining order from a judge, KPCC public radio reported.

Anybody in the state of California that still cares about constitutional rights needs to think about moving out now if they have the means to do so. Before long the state will be a giant Marxist re-education camp. Jews in Germany were warned to get out while the getting was good in the mid 1930's. Most did not heed the warning. You know the rest of the story. And by the way, gun confiscation was one of Hitler's first edicts for "public safety".

They can do the same thing in Maryland.

They can only have my guns when they pry my gun from my cold dead fingers!! Just remember the reasoning behind why our founding fathers put the Second Amendment in our Constitution!! The time is now to take action to protect our country, our way of life and our Constitution! PTL & pass the ammo!!

What I find stupid is they had advanced evidence of the guy making threats, so why was that not grounds for arrest?

that's probably what they want so they can justify even more restrictions. to 'them', cops are expendable just as we are. the end goal is to disarm the population by any means possible. that's why there is so much fear mongering in the media. and who owns the media? nothing is about OUR safety. it's all about 'their' safety and 'their' profits. that's all they care about, certainly not us. just keep running the machines and paying taxes. ( until the machines take ALL of the jobs, then we are worth even less ).

they make laws to keep us in line, and to enable whatever they wish to do with as little static as possible. how do they enforce these laws? threats. threat of taking your phony money. threat of putting you in prison. threat of violence at the end of a gun. why would they want us to be armed so we could resist them and defend ourselves?

go take a quick look at the history of the nations that disarmed its population and see what happened to them after that. that isn't fear mongering, that's historical fact.

as imclain would say, keep cheering.

Bit by bit, little by little, one step at a time, your "leaders" (which is akin to calling a mouse a dangerous predator) are disarming and restricting "we, the people".
You let them pass the Patriot Act (something that would have NEVER even been debated before). Then, to close the gaps in surveillance and suppression, they passed the NDAA.
Even today, most Americans aren't truly aware of just what those two acts actually allow the government to do, which is ABSOLUTELY ignore and disregard any and all Constitutional protection given to "we, the people".
You cheered and clapped so loud and long that your hands started to blister.
Sure. America will be the ONE exception to 5000 years of history.
We will turn over power to a select elite, who we are sure knows what's best for us (THEY are sure; you better believe it).
Individual freedom, personal responsibility, and limited government?
Who needs them?
Keep cheering.